22/06/2016 - Simone Manetti's documentary tells the story of the many lives of Chantal Ughi, a model, actress and Muay Thai champion, and won the award for Best Italian Film at Bologna's Biografilm Festival

A face glowing with sophisticated beauty, an imposing and ungainly body and a pained expression peeping out from behind her dark curls. Chantal Ughi appears before us on the screen sporting a black eye, but is unusually happy, because she got that black eye in the ring, by fighting: her passion, her life and her drug. Telling the story of this former model and actress-turned-Muay Thai champion is Goodbye Darling, I’m Off to Fight [+see also:
trailer
film profile], the debut feature-length documentary by Livornese director Simone Manetti (a former editor, of The First Beautiful Thing [+see also:
film review
trailer
film profile] by Paolo Virzì and Mozzarella Stories [+see also:
trailer
film profile] by Edoardo De Angelis, among others), which won the Italian competition at this year’s Biografilm Festival of Bologna.

“Each of us must fight the demons in our past”, a line in the film says. There are those who do so stretched out on a psychoanalyst’s couch, and those who choose to heal their soul by entering the ring. Chantal Ughi chose the latter option. An actress for the likes of Peter Del Monte, Citto Maselli and others, a model, singer and regular face on the New York underground scene, left standing on the edge of an abyss after getting out of a destructive relationship, she decides to leave New York and fly to Thailand, where she finds an outlet for her rage in Muay Thai. It turns out to be more than a hobby lasting a few weeks, a passion that gradually takes over her heart and mind and goes on to last five years, leading her to win four world titles.

With his camera, Simone Manetti follows Chantal, starting from when, after taking a break for a year due to a lack of motivation, she decides to return to Thailand to win back the world champion belt. Intensive training, punches, kicks, and a lot of sweat but a lot of spirituality, loneliness and praying thrown in too: the life that this woman chooses for herself, burdened by a past that has left deep scars, is a difficult and harsh life, full of deprivation. Chantal fully embraces this new way of life, loses herself in the city of Bangkok (which is very present in the often panoramic images photographed by Simone Mogliè). She wants to be thai, and fighting makes her feel a bit like she is. Manetti’s documentary is engaging in terms of both the images and sound (the beautiful music is by Francesco Motta) and describes, by mixing fresh footage with footage from the past, the human and sporting parable of a woman trying to find herself, a woman who never gives up, is deeply pained, and is a fighter to the end.

Goodbye Darling, I’m Off to Fight was produced by Alfredo Covelli for independent company Meproducodasolo. It had its European premiere at Biografilm after having its world premiere at the Newport Beach Film Festival in April, and is set to be released in theatres this autumn.

more about: Goodbye Darling, I'm Off To Fight

In his moving documentary, Simone Manetti commemorates Milanese artist Pippa Bacca’s final journey and, above all, her powerful message of peace

The association representing the sector’s auteurs and producers also awarded Goodbye Darling, I’m Off to Fight, River Memories, Vergot, The Cormorants and Castro

Simone Manetti's documentary tells the story of the many lives of Chantal Ughi, a model, actress and Muay Thai champion, and won the award for Best Italian Film at Bologna's Biografilm Festival

Tom Fassaert’s doc was Best Film in the International Competition, Goodbye Darling, I’m off to Fight won the Italian competition, while Best Debut Feature was Sonita 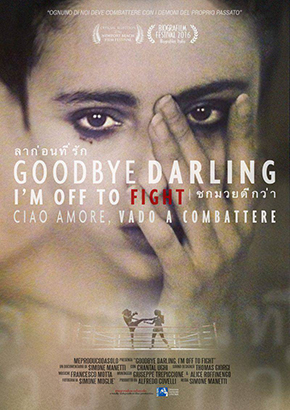 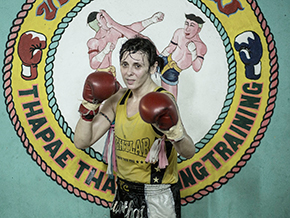 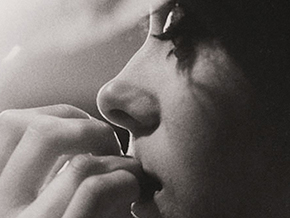