Bliss!: In pursuit of a father

Having its world premiere on Father’s Day as part of the Best of British strand of the 70th Edinburgh International Film Festival, Bliss! [+see also:
trailer
film profile] explores the importance of fathers in the upbringing of children. Adapted from the stage play of the same name by Writer’s Guild Award winner Alex Ferguson, Rita Osei’s directorial debut is a rites-of-passage adventure set in South Shields, England, and it tells the story of 16-year-old Tasha Robson (Freya Parks) and her quest for her biological father. When her mother’s abusive fiancé, Charlie (David Leon), returns home from jail, Tasha and her three siblings feel threatened, and therefore she resorts to a series of contrivances to keep him away from her family. During a minor scuffle, he accidentally reveals to Tasha that he’s not her real father, so, determined to find out the truth, she decides to question her older sister Jenny (Lauren Johns) and discover where her father might be – but all she can remember from her childhood memories is that their mother used to refer to him as “The Viking”. After finding confirmation on her birth certificate that her father is unknown and discovering at the local library that Vikings come from Norway, Tasha, armed only with an old map and some cash that she borrowed from her brother Danny (Reece Noi), sets sail for the enchanting Scandinavian country to face her past and define her future.

From this point on, the film follows two parallel storylines: Tasha looking for her biological father in Norway, and her siblings dealing with Charlie back in South Shields, where Danny is himself about to become a father. The Norwegian section of the film was not part of the original stage play and is the result of a trip that Osei took in 2009. Richard Stoddard’s pleasing cinematography, which earned him the BAFTA Cymru Award for his work on the TV mini-series Hinterland, enhances the beauty of the Scandinavian landscapes and, supported by Hélène Muddiman’s omnipresent score recorded at Fox's historic Newman sound stage in Los Angeles, establishes and maintains a magical atmosphere typical of the genre. The riveting topic of fatherhood makes Bliss! an engaging and universal film that entertains children and gives food for thought to a more mature audience. Up-and-coming actress Freya Parks’ delightful performance and her involvement in the development of her role are clear signs of her dedication to the craft – the catchy musical leitmotif that Tasha sings during the film was originally written by Parks and later included in the script.

Rita Osei is already working with writer Alex Ferguson on a new, undisclosed project, and it seems that in the meantime, Bliss! will most likely attract the attention of UK distributors and broadcasters. The movie was produced by the UK’s Premiere Picture, GSP Studios, Bliss Films, and Sugar & Water Films Ltd, and is represented internationally by GSP Studios International.

Bliss!: In pursuit of a father 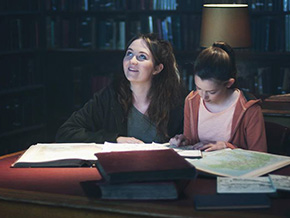