VENICE 2016 Out of Competition

08/09/2016 - VENICE 2016: The protagonists of the conflict in Northern Ireland played by two extraordinary actors of the likes of Irishman Colm Meaney and Englishman Timothy Spall in Nick Hamm’s film

Timothy Spall and Colm Meaney in The Journey

The Journey [+see also:
trailer
film profile] by Nick Hamm, which was screened out of competition at the Venice Film Festival, is the story of two extremists and their journey towards reconciliation. Two men who hated one another with a passion and proved that peace can and must always prevail, even at the cost of compromise.

These two men were the protagonists of the conflict in Northern Ireland, known more commonly as ‘The Troubles’: 40 years during which bombings and shootouts in the streets became an everyday reality. Their names are Martin McGuinness and Ian Paisley, and they are played on the big screen by two extraordinary actors, Irishman Colm Meaney and Englishman Timothy Spall. McGuinness was a militant and IRA leader, who later became a leading figure within Sinn Féin and the ‘public face’ of the radicals. He was one of the architects of one of the most important peace processes in the country. Ian Paisley was an extremist Presbyterian minister, and was opposed to any negotiations with the Catholics. It was he who interrupted a speech given in 1988 to the European Parliament by Pope John Paul II, calling him the Antichrist.

This latest film by Nick Hamm (who also directed Killing Bono [+see also:
trailer
film profile]) takes place over the space of a day. The British prime minister Tony Blair and Irish leader Bertie Ahern have gathered together the representatives of the two Northern Irish political parties in St. Andrews, Scotland, to reach an agreement and govern the country together. Unfortunately, Ian Paisley must return home to Belfast to celebrate his 50th wedding anniversary. “It was the last time he said yes”, according to a line from the film. MI5 agent Harry Patterson (John Hurt) finds an plane for the minister, but then McGuinness also says he wants to leave, with the excuse that he has to consult with the leaders of the IRA. The long journey to the airport in the car is actually a pretext for bringing the two men, who won’t even talk to one another, together, and they are monitored using a video camera as an agent pretends to be their young ignorant driver (Freddie Highmore). Screenwriter Colin Bateman (Northern Irish) imagines what might have happened during that journey, which led to the agreement of 8 May 2007 and the birth of a new government headed up by Paisley with McGuinness as his second in command.

The duel/duet between the two men, with the drumbeats of war serving as the soundtrack, is a real cinematographic delight. Crackling gags are fired off (the reverend speaks almost exclusively in verses from the Old Testament) and tone down the drama of their reciprocal accusations. Forced to get out of the car unexpectedly and wader around in the woods, each man discovers the human being behind the other’s mask of uncompromising politician. Reaching this agreement will mean betraying their people after years of fighting and death, but it will also draw the applause of the whole world.

The film, which has also been selected for the Toronto IFF, was produced by Greenroom Entertainment and Tempo Production, in association with Lipsync Productions, Gorean Films and Northern Ireland Screen and sold by IM Global. The UK release date of the film has yet to be announced.

more about: The Journey

A Date for Mad Mary wins Best Film at IFTAs

The Siege of Jadotville picks up three awards

VENICE 2016: The protagonists of the conflict in Northern Ireland played by two extraordinary actors of the likes of Irishman Colm Meaney and Englishman Timothy Spall in Nick Hamm’s film

Malick, Wenders, Kusturica and Piccioni in the running for the Golden Lion 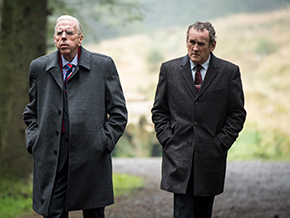