The Cambridge Squatter: “No, no, we shall not be moved”

26/09/2016 - SAN SEBASTIÁN 2016: New from Brazil’s Eliane Caffé is a tragicomedy of manners that aims to hold up a mirror to the realities of life in contemporary Brazil

To say that The Cambridge Squatter [+see also:
trailer
film profile] is a reflection of the lived realities of the Brazilian people in 2016 is to see only the tip of iceberg. In this tragicomedy of manners, Eliane Caffé seems to have poked her camera through a hole in the wall of a grotty residential building to reveal, with a brutal candour tempered by humour and affection, a glimpse of the everyday lives of the protagonists: a collection of vulnerable workers and a group of refugees just recently arrived in Brazil. The San Sebastián International Film Festival has been as auspicious occasion for Eliane Caffé — The Cambridge Squatter was selected for Films in Progress in 2015, and has now premièred in the Horizontes Latinos Section.

An unremarkable tenant takes possession of an empty building and occupies it: this is the basic premise of Caffé’s latest work. As the director herself said in the discussion that followed its first public screening: “My film isn’t fiction — this is what is happening in Brazil right now.” The message that it is keen to get across is that, despite divisions of class and culture, everyone ultimately just wants the same thing: “to live in peace, and to have a chance at a home.”

As they say, you shouldn’t judge a book by its cover. The Cambridge Squatter is not just a portrait of a socio-economic class that is rapidly dying out (low-paid casual workers), nor is it an account of the refugee experience (those in the film have been taken in more to placate the United Nations than by the beneficence of Brazilian society). It’s a film that gets involved. It’s a film that is not afraid to lay the blame where it belongs. The characters, employing a rhetoric borrowed from others (led by a magnificent Carmen Silva,they end up joining the FLM — an activist organisation demanding the right to housing) and a strength that is all their own, try to stand up to the police officers who in a fortnight will demolish their homes. “If we are united, we are invincible” could very well be their rallying cry, and it is in fact as an ensemble piece that Caffé’s film truly excels. The psychology of the characters is beautifully observed — there are no cut-outs here, just real people with all their contradictions, and we can see into their very souls. They are the definition of “vulnerable people”. One scene in particular, where a refugee from Jordan propounds his theory about women and alcohol, deserves special mention...

Complemented by veteran actors like Carmen Silva, the multi-layered performance of José Dumont and the infectious laughter of a refreshing Suely Franco, award-winning and unknown actors alike shine in this original, modern and highly topical comedy of manners. The mise-en-scene is particularly effective, taking the building that the characters are occupying as a starting point and setting each section of the film on one of its floors. Angry and homeless, alone or in groups — what if power really could be gained through unity?

more about: The Cambridge Squatter

The Cambridge Squatter: “No, no, we shall not be moved”

SAN SEBASTIÁN 2016: New from Brazil’s Eliane Caffé is a tragicomedy of manners that aims to hold up a mirror to the realities of life in contemporary Brazil

Bercot, des Pallières and Bonello are in competition, Jérôme Salle will close the gathering, and Morgan Simon and Jean-Gabriel Périot have secured a place in New Directors

The gathering for the Latin American and European audiovisual industry will run on 19, 20 and 21 September

This morning, the national titles screening at the upcoming edition of the Basque festival were announced; they include the new efforts by Alberto Rodríguez and Jonás Trueba, both in competition 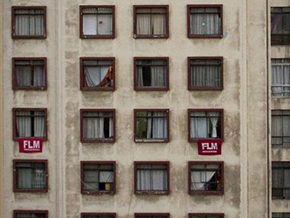