The Dazzling Light of Sunset: The essence of the contrasts of life in rural Georgia 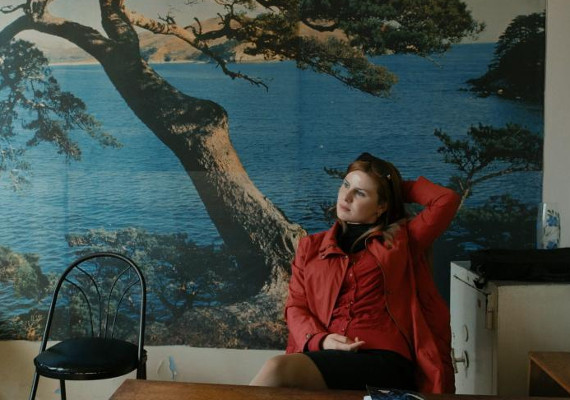 Georgian filmmaker Salome Jashi has, so far, made several short documentaries, and the mid-length Bakhmaro, which screened at DOK Leipzig and won a special mention at Jihlava in 2011. In these films, she showed her interest in observing common people and the places they inhabit, often including a political aspect. This approach culminated this year in the 74-minute The Dazzling Light of Sunset [+see also:
trailer
film profile], which premiered at Visions du Réel in Nyon, and is now screening at the Astra Film Festival in Sibiu.

The film opens with a beautiful, almost spiritual shot. The camera pans to the right from an upper angle across a decrepit hall, probably a school gym, with broken windows and tatters for curtains, to the sound of female voice singing, accompanied by a panduri (a small, three-stringed Georgian instrument, similar to a guitar). As we reach the end of the hall, we see two rows of audience members and four musicians on a small stage.

The opening credits roll over a tropical island painting, one of the backgrounds for the shows made by a small, makeshift local TV station with a crew of two – journalist, anchor and producer Dariko, and her trusty cameraman, sound engineer, and editor Khaka. Jashi follows them as they cover life in the town of Tsalenjikha (population 8,900) in western Georgia.

The beautiful opening sequence is soon contrasted by preparations for a beauty contest/fashion show, in which girls, aged 12 to 22, are being taught to walk in 15 cm heels. A "giant" owl is discovered in the woods, and while Dariko rushes to get the story, the phlegmatic, no-nonsense Khaka reminds her they had a piece about the same animal earlier that year. At a loud, kitschy wedding party, we see a procession of men carrying roast baby deer between tables of deliriously drunk guests. Right after that, we go into the dignified silence of a church, where a priest is preparing for mass. With its wooden crosses and bare walls, the Georgian version of Orthodox Christianity is much more modest than the opulent, Russian one, where everything is made of gold.

A particularly touching passage of elderly people with financial or health problems visiting the municipality governor precedes the campaign for local elections, and an anxious Dariko has to moderate a TV debate, with invaluable instructions from Khaka. Jashi is perhaps delivering a political message here, when she follows this segment with the scene of a soldier’s burial ceremony. The message may not be too profound or poignant, but, in this way, the filmmaker simply shows us that, in the tumultuous region of Caucasus (or any other, for that matter), nothing really changes, regardless of who the people – her only real topic – vote for at the elections.

All these parts are delicately balanced and framed with discipline, and Jashi even adds some playfulness, like when she uses a wide shot of a group of people enjoying fireworks. Jashi positions the camera to face the group, while the fireworks are reflected on the windows of a house behind them. This composition is a perfect example of her approach focusing on the essence that comes out of particular situations. And, for the ethics of showing a certain image of the country to international audiences, wait for the final scene.

Dazzling Light of Sunset is a co-production between Georgia's Sakdoc and Germany's inselfilm, with Syndicado handling the international rights.

more about: The Dazzling Light of Sunset

New films by Rok Biček, Salome Jashi, Tatjana Božić, and Marta Popivoda are among the projects selected for the Trieste co-production forum

The Dazzling Light of Sunset and Depth Two triumph at ZagrebDox

The Georgian film has won in the International Competition, while the Serbian documentary won the Best Regional Film and Best Young Filmmaker Awards

The Dazzling Light of Sunset won the Between the Seas section and Best Debut; FC Roma and Normal Autistic Film shared the Best Czech Film Award

How to fund a documentary in Europe?

At 20, Jihlava's industry programme is richer than ever

The US film has won the OutstanDox Award, while The Dazzling Light of Sunset picked up the Best Central and Eastern European Documentary Award in Sibiu

The Dazzling Light of Sunset: The essence of the contrasts of life in rural Georgia 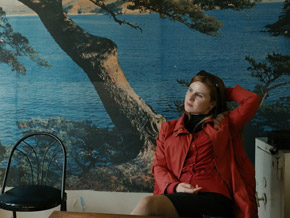 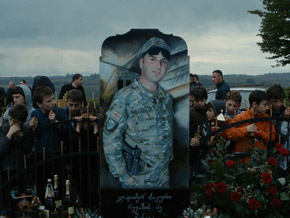 The great-nephew of the great Valencian maestro has presented a documentary in the city of their birth that recounts the first 25 years in the genius' life, when his unique personality was formed