“We live in a time of deep recession; the state coffers are empty. We pay war widows their pensions, but given that it’s been more than 20 years now, some of them are not widows any more.” This is the starting point for Ministry of Love [+see also:
trailer
film profile], written and directed by Croatian director Pavo Marinkovic, an enjoyable, bittersweet comedy presented this week in the Eastern Selection section of the 17th Arras Film Festival.

And so we find ourselves at the heart of a new state entity dubbed the “Family Inspectorate”, which is tasked with uncovering these “happy widows”; this, of course, throws up a number of initial question marks (“You expect us to pay them a visit and check who they’re sleeping with?”; “But these are the widows of heroes!”), which are quickly swept under the carpet, as necessity dictates that one must work to earn a living! This is indeed the case for investigation team number 13, made up of Kreso (Stjepan Peric – who turned heads in Ivan-Goran Vitez’s Shooting Stars [+see also:
trailer
film profile]) and Josip Sikic (Drazen Kühn, the chemist from The Priest’s Children [+see also:
film review
trailer
interview: Vinko Bresan
film profile]). The former, an erstwhile biologist disillusioned by his fruitless job hunt and finding himself in the midst of a latent marital crisis, has been given a foot in the door by his father-in-law and sets to work with minimal commitment, while the latter gets seriously stuck into the job with great tenacity, dreaming of a promotion one day, should he be successful.

Assigned to a provincial region, the motley team of two motors away from Zagreb in a spluttering red car that they have been provided with for the occasion, and they criss-cross the roads of deepest Croatia, on a hunt for dishonest widows. Kreso sabotages the first “hunt”, which he’s not the slightest bit interested in. But as they head off on more and more journeys, out of a sense of pride towards his family, he starts to get increasingly involved and proves to be incredibly inventive in his efforts to dupe the women whom the duo visit in order to establish whether they have been living with a new partner (be they male or female) for at least three years. Posing as an old comrade in arms, a health inspector, a statistical officer, a representative from a centre for sexual minorities’ rights, an insurance salesman… No ruse is off-limits as he strives to collar the offenders and earn himself a juicy bonus, the respect of his peers and prospects for promotion. But the hunt, peppered with lies and betrayal, will nevertheless instil a crisis of conscience in Kreso...

This is a simple and effective film on the surface, thanks to the quality of its two lead actors, buoyed by a classic spirit of situation comedy created by this combination of mismatched personalities, and the farcical way it treats state "totalitarianism" and the acts carried out for the sake of the “common good”, shot through with absurdity and sheer ridiculousness. But Ministry of Love also sketches out a portrait of a man staring into the void and feeling hemmed in by social conformity (“Well done, you’ve saved the state money and earned some for your family!”), who is going against his true nature. Interspersing his tale with a dash of frustrated romanticism and flirting with the idea of including an explicit moral that is, at the end of the day, a very relative one – as everyone has their own secrets to hide – Pavo Marinkovic has made an accomplished comedy in much the same vein as his previous film, Love Life of a Gentle Coward.

Produced by Telefilm (which we also have to thank for Number 55 [+see also:
film review
trailer
film profile], among other films), Ministry of Love was co-produced by the Czech Republic and received backing from Eurimages. Its international sales are being handled by British sales agent Starline Entertainment.

more about: Ministry of Love

The tenth edition of the event became competitive and awarded actors from On the Other Side, Ministry of Love and Death in Sarajevo 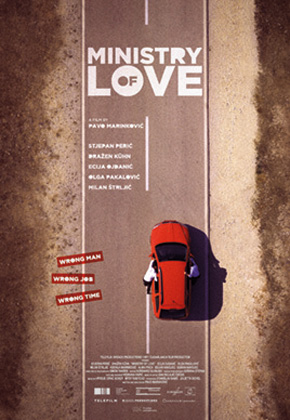 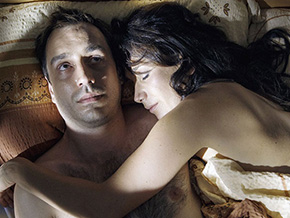