The Girl Down Loch Änzi: A discrete and elegant daydream

Alice Schmid once again succeeds in amazing us with her ability to portray childhood, in a way that is poetic yet carefree. Her latest feature film, The Girl Down Loch Änzi [+see also:
trailer
film profile], which had its world premiere at the IDFA (First Appearance Competition), where it was also nominated for the IDFA Award for Best Female-Directed Documentary, has the same precision and empathy that has accompanied almost all her productions since Say No (which went on to become a classic among films about child abuse).

Like its predecessor Die Kinder von Napf, the latest feature by Alice Schmid takes us into the heart of Switzerland, where the mountains hold myths and legends that still live on in the hearts of the locals. The sensitive and at times comical The Girl Down Loch Änzi centres around Laura, the 12-year-old daughter of farmers who lives on a vast farm surrounded by breathtaking landscapes, both majestic and mysterious all at once. Laura, who has hang-ups about her weight but is no less capable of asserting her blazing personality for it, finds herself spending the summer alone (no other child seems to be around), inventing half-baked games, helping out on the farm (the calm ease with which she watches a rabbit get skinned alive is subtle, almost comical in its cruelty), and above all, working up the guts to go down to Lake Änzi, where, legend has it, a young girl who dared challenge the authority of her father is locked up. Accompanying her on this adventure, which she records meticulously in her virtual diary (using her almost dated Mac, in which she confides about her discomfort), is a young boy who has come from the city to spend a few days at the farm. Will her unlikely companion be brave enough to make it down to Lake Änzi? Will their friendship be strong enough to allow them overcome their fears together?

The Girl Down Loch Änzi is a documentary that is so poetic and captivating it’s almost like a piece of fiction, a legend within a legend. The charm of Alice Schmid’s latest film lies in the very fact that it shakes off uncomfortable labels (documentary/fiction) to enable us to simply enjoy a very human and moving story. With the sensitivity that characterises all her films, Alice Schmid concentrates on the apparently insignificant details that make up Laura’s everyday reality: the imploring expression of her pony, the ritual pairing off of turkeys, and the mud that covers her wellington boots, making them important, the essential vocabulary of a life rich in simplicity. Like paintings brought to life, these stolen moments combine with the curious gaze of the camera to bring us a sublime and cruel portrait of a girl who is strong in spite of the weight of life she feels pressing down on her. The majestic mountains that surround Laura seem to transform into landscapes of flesh that fit the curves of her body to perfection, as if to give them the courage to fly off into adulthood. “You look good the way you are. The world’s your oyster” the mysterious prisoner of Lake Änzi whispers to her at the end of the film, a magical phrase that seems to capture the very essence of the film, delicate and full of humour.

more about: The Girl Down Loch Änzi

My Life as a Zucchini, Goodbye Berlin and The Girl Down Loch Änzi are the three titles that will compete for the award

The Girl Down Loch Änzi: A discrete and elegant daydream 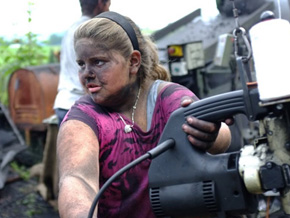