02/12/2016 - Bruno Bigoni’s docufiction, which was presented at the Filmmaker Festival in Milan, is a sophisticated game that pays tribute to the great French poet and film itself

A sophisticated game, an ironic form of self-deceit to reveal the artifice of film and perhaps life itself, and most certainly a celebration of poetry and a great poet. We are, of course, referring here to Chi mi ha incontrato, non mi ha visto [+see also:
trailer
film profile] by documentary maker Bruno Bigoni, which was recently shown at the Turin Film Festival and is scheduled to be screened next Sunday at the 36th Filmmaker Festival in Milan.

The film opens with a verse by Arthur Rimbaud on the song Le Petit Chevalier by Nico: “Et le poète soûl engueulait l’Univers” (“And the drunken poet gave the Universe hell”. The only known verse of a lost poem). Indeed, all the quotations that feature in the film are from works by the famous “child poet”. The director himself also puts in an appearance, looking at the camera and explaining that he was working on a project on his beloved Rimbaud when a mysterious French woman called him up and offered him an unpublished photo of the poet. Bigoni thus becomes a protagonist, an actor in his own film, and throws himself into this adventure: an unpublished photo of Rimbaud which would, once purchased and made public, completely change everything that had been said and written up until then on the poet!

Bigoni films himself as he consults academics, such as literary critic Renato Minore (“the world of unpublished photographs is vast and dangerous… we know there are fakes out there and who can guarantee their authenticity....give up your search…”). He goes to Charleville in France, the town where the poet was born, and talks to a great niece of the poet, Madame Seville Rimbaud (“if you want to believe that this man in the photograph is Rimbaud that’s fine… believe it… that’s all that matters….”). He stops by the grave of Rimbaud, as if seeking confirmation in his search. The mysterious woman then comes back with an even more extraordinary offer. A mundane hitch stops the meeting taking place, and the deal goes up in smoke. Bruno is left with this strange photograph and a dream. A few months later, a parcel arrives from an unknown sender in France, containing a CD entitled: “Those who met me never saw me” (the very title of the film). On the CD is a recording of a croaking voice which starts off by saying: “... I’ve never had a name…”. As an aphorism of the poet goes: Life is the farce which everyone has to perform.

The film is produced by Altamarea and Fake Film in partnership with Start. The sound bites and French voices that feature in the film were provided by the Rimbaud Museum in Charleville.

more about: Those Who Met Me, Did Not See Me

Bruno Bigoni has given voice to an extraordinary man who has given a name to hundreds of soldiers who disappeared during the Second World War, including the father of Roger Waters from the band...

Social exploration in cinema presented at the Foggia Film Festival

The 7th edition will be held from 19-25 November with a 65-title programme that includes debut and second feature films. Sergio Rubini will be chairing the juries

Bruno Bigoni’s docufiction, which was presented at the Filmmaker Festival in Milan, is a sophisticated game that pays tribute to the great French poet and film itself

The best of international independent film at the Turin Film Festival

The programme of the 34th edition of the festival directed by Emanuela Martini, which will take place in the Piedmontese capital from 18 to 26 November 2016, has been unveiled in Rome 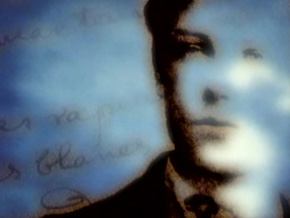