01/03/2017 - The 11th film by the director of Facing Window and Loose Cannons is a personal journey towards his own roots, with a touch of the thriller genre. In Italian theatres from 2 March with 01

The Bosphorus, the red coloured houses, the call to prayer, alongside skyscrapers, lights in the night, the relentless noise of drilling as a new modern metropolis is built. We see and above all hear Istanbul in the new film – the eleventh – by Ferzan Ozpetek. It’s been almost twenty years since the Turkish-Italian director has filmed in his homeland, since his first two films, Il bagno turco and Harem Suare. With Rosso Istanbul [+see also:
trailer
film profile] he takes us on a personal journey towards his own roots, immersing us into memories from his youth that live on in the sad and bewildered gaze of Orhan, the protagonist of the story and alter ego of Ozpotek, in a film that takes the autobiographical book of the same name that it’s based on (published in 2013 by Mondadori) and enriches it with characters, mystery and plot twists that almost make it a thriller.

Shot in Turkish with a cast of Turkish actors who are very well-known in Turkey, the film tells the story of Orhan (Halit Ergenc), an editor who, having moved to London, returns to Istanbul twenty years later to help Deniz (Nejat Isler), a film director, to complete the draft for his first book. After the first part, in which Deniz introduces Orhan to his life, his evocative traditional house on the banks of the Bosphorus, his family (mother, brother and aunts), his colleagues and friends – all characters we find in his book, in particular the beautiful Neval, played by Tuba Buyukustun – and after an alcohol-fuelled evening at a party amongst writers in a sumptuous apartment at the top of a skyscraper that looms over the city, the film shifts focus. Deniz disappears mysteriously, and Orhan is forced to remain in Istanbul longer than originally planned: his business trip is thus transformed into an opportunity for him to face up to his past and his ghosts.

Sophisticated, sorrowful and enigmatic, Rosso Istanbul is one of the least immediate and “popular” films by the director, who we left three years ago with Fasten Your Seatbelts [+see also:
film review
trailer
interview: Ferzan Ozpetek
film profile], an intense melodrama which was more universal and engaging. This film is a very personal piece: "There are a lot of things in it from my life, from my childhood and my past”, admits Ozpetek, who hasn’t lived in Turkey for 41 years, “but it’s not a simple exercise in nostalgia. I wanted to try to convey the atmosphere of Istanbul, a suspended city which is changing rapidly, and portray people and moods that perhaps won’t be around for much longer”. Whilst the plot leaves us feeling unsatisfied (whatever happened to Deniz?) and at times a bit floored (for example with what happens to Deniz’s lover Jusuf, played by Mehmet Gunsur), the images and sounds of a contradictory and pained metropolis stay with us, one which is modern yet retro, fascinating yet restless, the citizens of which see themselves reflected in its sea, challenge it and emerge to rediscover its heart.

Rosso Istanbul is an Italian-Turkish co-production between R&C Produzioni (Tilde Corsi and Gianni Romoli), Faros Film and Rai Cinema with BKM-Imaj. The film will be released in Italian theatres on 2 March by 01 in 200 copies, and on 3 March in Turkey.

Filming begins on Naples in Veils by Ferzan Ozpetek

The 11th film by the director of Facing Window and Loose Cannons is a personal journey towards his own roots, with a touch of the thriller genre. In Italian theatres from 2 March with 01 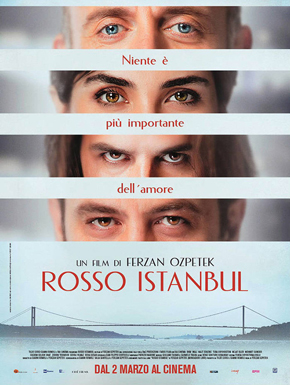 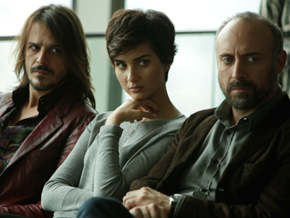 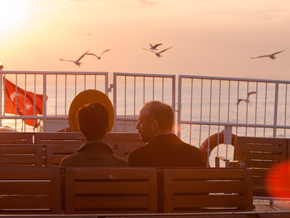