A Campaign Of Their Own, a popular utopia in the name of freedom

26/04/2017 - The debut feature by Lionel Rupp (Wonderland) and Michael David Mitchell, which was screened in competition at Visions du Réel in Nyon, shows us a different America, brave and free

After the experience of ensemble film Wonderland [+see also:
film review
trailer
interview: Carmen Jaquier and Lionel R…
film profile], which brought together 10 emerging talents in Swiss film, young director Lionel Rupp has teamed up with Michael David Mitchell, one of his partners in crime at Zooscope Production, to present A Campaign Of Their Own [+see also:
trailer
film profile] (in competition at Visions du Réel). Lionel Rupp and Michael David Mitchell (who was born in the state of New York but is Swiss by adoption) probe the heart of a real America, inhabited by people who still want to believe in a future built on equality.

The charming Jonathan Katz, the protagonist of A Campaign Of Their Own, firmly believes that presidential candidate Bernie Sanders is the only chance of beating the threat of Donald Trump. Sanders seems to channel the concerns and hopes of an America that still wants to believe in a better world: one that is fairer, freer, and more benevolent. Driven by his growing enthusiasm, Jonathan joins Sanders’ supporters, the soldiers of a peaceful revolution taking shape. The more the campaign progresses, the clearer it becomes that Sanders will not win the Democratic Party primaries, but this doesn’t stop Jonathan from fighting the good fight. When Sanders admits defeat and urges his supporters to vote for Hilary Clinton, our hero without arms accuses the Democratic Party of purposefully handicapping the senator of Vermont. The battle is lost but the war isn’t over, and Jonathan will go to extremes to defend his vision of the world.

Lionel Rupp and Michael David Mitchell wanted to use the camera to capture a crucial moment in history. A Campaign Of Their Own is testimony to the strength of a citizens’ movement free from the mandate of political parties, driven only by an overwhelming desire for equality and communion. Sanders’ political campaign stoked the passions of a hardened group of citizens sick and tired of the usual “well-to-do speeches” and willing to do anything (even sacrifice the group’s cohesion) to remain faithful to their ideals. The fight rages on, even without its leader Sanders, thanks to the growing number of members who have turned maverick, starved of justice. Where do you fit in as a citizen in a democratic system that’s crumbling? Is it still possible to believe in utopias? Lionel Rupp and Michael David Mitchell give us food for thought here, compelling us to face up to the difficulties of a society that no longer knows who to believe and is rather dangerously giving up on dreaming. The film focuses on characters who usually live in the shadow of history with a capital ‘H’, pacifist soldiers drunk on ideals. History and news, as it is presented to us by newspapers and television channels, is biased and doesn’t give us a comprehensive and cohesive overview of events. Lionel Rupp and Michael David Mitchell shows us what we usually don’t see, that which is relegated to the margins of history. Sanders appears only as a watermark, an image projected on a big screen, filmed almost by accident, who appears only very briefly, hidden even by the bodies of the activists. The real protagonists of A Campaign Of Their Own are Jonathan, Sanders’ other supporters, and the crowd of nameless persons who are turned, with the help of Lionel Rupp and Michael David’s camera, into dear friends. A Campaign Of Their Own is an independent film which is direct, brave, and encourages us to rebel.

A Campaign Of Their Own is produced by Zooscope Production.

more about: A Campaign of Their Own

A Campaign Of Their Own, a popular utopia in the name of freedom

The debut feature by Lionel Rupp (Wonderland) and Michael David Mitchell, which was screened in competition at Visions du Réel in Nyon, shows us a different America, brave and free 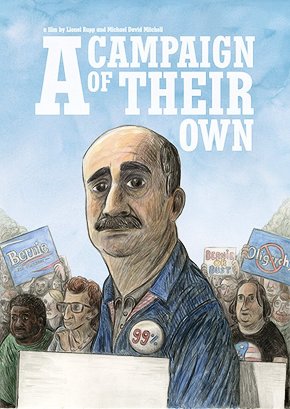 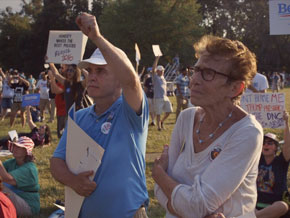