Djam: Freedom as a woman

27/05/2017 - CANNES 2017: Tony Gatlif takes us to the country of rebetiko and a young Greek woman who we follow on a well-defined getaway of irresistible songs and visceral dancing

Djam [+see also:
trailer
film profile], the latest film by Tony Gatlif, which gave rise to a great evening of film and a concert on the Croisette at the 70th Cannes Film Festival, is the name of a woman (played marvellously by Daphne Patakia), a Greek girl who is beautiful, insolent, always at ease, fun, dances like an irresistible Salome and sends her songs, that are full of passion and melancholy, straight to the heart. The writer of Gadjo Dilo and Exiles could not have chosen a better guide – because it is impossible not to be left enraptured by this bright heroine – to show us this traditional form of Greek music called rebetiko, which he himself has been listening to for some time, a type of music which is rhythmic yet captivating, painful yet rebellious, and which takes hold of you and passionately drags you through subversive lyrics that speak of and to the people, that protest against power, money and all those who don’t know how to love. It’s a type of song that is soaked in its culture. It’s visceral, and we get to know it by Djam’s side, as her beloved step-father has sent her from Lesbos to Istanbul to have a shaft on his boat fixed and to carry out some other small tasks that give her getaway a fairytale feel.

Along the way and on the doorstep to Europe, Djam experiences all sorts of mishaps, above all when she meets Avril, a somewhat lost and uprooted French girl who is unaware of the magnificent culture she carries inside her. She doesn’t have the same freedom as Djam but is infected by it, exercising it for example by choosing to remain clingy, even though the Greek girl tells her to leave her in peace. And so, between scams, robbery and unexpected plot twists in the attempt to save a man from despair, they hit the road together, always to the beat of the music, and are happy in spite of everything, happy and alive together. Because like a Noah’s Ark of sounds and lyrics, a boat that gathers together the photos of forefathers around the living, rebetiko has the same effect wherever it goes, in a hot atmosphere of communion.

Djam is the incarnation of the spirit of rebetiko. Free and self-assured, she lives as she pleases and her joy is simple as it starts over with every song, which is always an occasion for sharing, although the analogy goes further with Greek song. Through this character who emanates purity, who goes around wearing nothing under her skirt, on the burning roofs where she walks and sleeps at night, under the stars, Gatlif also wanted – he explains, resentful of the regression of the female condition since the end of the 1960s – to give women back an independence that is being taken away from them. If Djam doesn’t worry about not wearing pants, or being brazen, it is because she doesn’t have to. She doesn’t only know who she is, but, as Prévert would say, she is who she is, does what she wants and doesn’t hide it, and it’s just as well because that’s how we like he

CANNES 2018: The Cannes Film Festival’s Film Market has got off to a flying start for Playtime, Luxbox, Celluloid Dreams, Memento and Pathé

Djam: Freedom as a woman 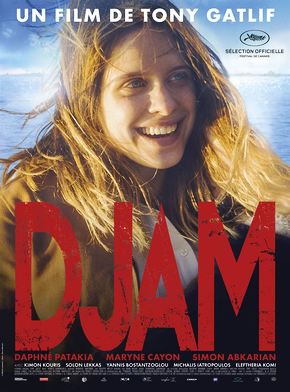