Tarzan’s Testicles: Man and ape staring into each other’s eyes

06/07/2017 - KARLOVY VARY 2017: Alexandru Solomon’s documentary about one of the last research institutes experimenting on monkeys is not for the faint of heart

A thought-provoking exploration of an inviting, unfamiliar space and a certain mentality, Romanian director Alexandru Solomon’s feature-length documentary Tarzan’s Testicles [+see also:
trailer
interview: Alexandru Solomon
film profile] is currently being shown in the Documentary Competition of the 52nd Karlovy Vary International Film Festival (30 June-8 July). In his quest to delve into the human soul and one of the craziest scientific endeavours of the former Soviet Union, Solomon competently, if rather erratically, discusses cruelty and history, using as his lens the always interesting Abkhazia, the partially recognised state on the eastern coast of the Black Sea.

Less than 1,000 km over the Black Sea from Solomon’s native Romania, Abkhazia is a treasure trove of information for historians and documentarians, with an almost impossible history and a continuously changing political position. The region’s biggest city, Sukhumi, is also home to a research institute that uses apes and monkeys for developing drugs and treatments. It is a place frozen in time, where hundreds of apes seem to be the answer to the future – but at what cost?

Solomon receives unprecedented access to a realm that may look like a zoo to some (and actually, it is visited as if it were a zoo), but the furry stars of the show are often used for painful, some might say inhumane, experiments, using methods that many would hope are still used only in Abkhazia. DoP Radu Gorgos’ camera moves among the cages and the dark corridors, then looks into the eyes of the researchers and explores their troubled relationship with the monkeys, the sources of hope in a more prosperous future, but also the cause of much heartache.

Besides discussing the film’s most obvious topic, cruelty against animals in the name of science, and throwing in details about a Soviet research programme meant to create man-ape hybrids to be used as workers and for fighting wars, Solomon offers more philosophical topics to the attentive viewer. Apes are man’s closest relative, but are not exactly man; Abkhazia is a partially recognised state, but not exactly a country. This is an excellent position from which to discuss our view on the world.

The contrast between the preconceived image we have of monkeys, socialising and grooming each other in lush forests, or at least in spacious cages at the zoo, and the sad, resigned beasts waiting in cramped cages for the next experiment that may claim their life challenges perspectives on a much larger scale: how much of what we think about the world is true? How much of it is a figment of our imagination or the result of biased media intoxication, a mix of stimuli necessary to nurture our comfortable, easy-to-swallow image of the world?

Another challenging aspect explored by the documentary is the deep love that the caretakers develop for the monkeys. In one of the most emotional sequences, a very young monkey is seen sleeping in the arms of a caretaker, being soothed by a pacifier. In a later scene, the same caretaker tells the researchers to “leave that monkey in peace”, because it’s hers. It is easy to understand the connection, but this endearing moment invites a difficult question: what happens with the other monkeys?

Tarzan’s Testicles was produced by HiFilm Productions and co-produced by French outfit Seppia. After its national premiere at the Transilvania International Film Festival and its appearance at Karlovy Vary, the documentary will be released in Romania later this year by microFILM.

KARLOVY VARY 2017: We caught up with Romanian director Alexandru Solomon, who is in the Documentary Competition with his new film, Tarzan's Testicles

24h Europe – We Are the Future enters post-production

The groundbreaking project, directed by 45 international filmmakers, wrapped filming on 18 June and is now in the post-production phase

Tarzan’s Testicles: Man and ape staring into each other’s eyes

KARLOVY VARY 2017: Alexandru Solomon’s documentary about one of the last research institutes experimenting on monkeys is not for the faint of heart 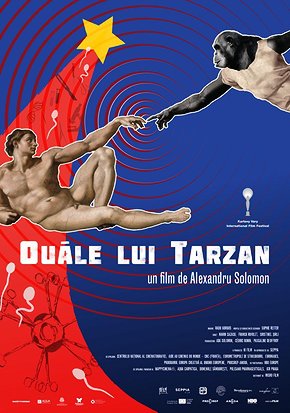