Agape: The love of God in an intolerant society

31/07/2017 - Veteran Croatian filmmaker Branko Schmidt’s film, which premiered at Pula, is a powerful critique of a failed society through the lens of the church, religion, labels and violence

Branko Schmidt’s new film, Agape [+see also:
trailer
interview: Branko Schmidt
film profile], is his third collaborative effort with screenwriter Ivo Balenović and serves as a conclusion to their informal social-criticism trilogy, following Metastases (2009), set in a milieu of lowlifes, criminals, drug addicts and alcoholics, echoing the recent war, and Vegetarian Cannibal [+see also:
film review
trailer
film profile] (2012), which deals with the interconnected worlds of organised crime, corrupt police and a flawed health system. Revolving around the issues of the church, paedophilia, God’s love and intolerance amongst the Croatian youth, Agape, which world-premiered at the recent Pula Film Festival, goes even deeper, acting as an exposé of a failed society, church practices and neglected youth, and exploring the more philosophical and universal topics of love, understanding and morality.

The story follows Miran (played by Goran Bogdan, an actor glimpsed in virtually every Croatian film lately), a parish priest in the Zagreb suburbs and a catechism teacher in a local high school. He tries to be a role model for “his children”; he drives a motorbike, plays basketball with them, drinks beer and invites them over for video-game sessions. He pays special attention to Goran (young Serbian actor Denis Murić, of No One’s Child [+see also:
film review
trailer
film profile] fame), a boy from an orphanage; this does not go unnoticed by Goran’s fellow classmates and lands the boy in trouble. But the priest’s problems soon multiply when an angelic-looking, intelligent but vain new classmate, Gabriel (Murić’s buddy from No One’s Child, Pavle Čemerikić), appears on the scene and becomes Goran’s rival for Miran’s attention and affection. Besides the unhealthy atmosphere in class, the real problem emerges as Miran slowly but surely loses his control over the balance between the highest form of God’s love, which he preaches and tries to live according to, and, for a man of the Catholic faith, the unpleasant labels that arise from speculations about his interest in boys.

Veteran Croatian filmmaker Schmidt deals with a number of interconnected, thorny topics, and manages to unfold and examine them in a lean, 77-minute-long format. This was not an easy task, since he and Balenović (together with Sandra Antolić and Zrinka Katarina Matijević) came up with numerous drafts and versions of the script, trying to correctly develop the characters and create the right tensions between them. Schmidt unfolds the story like a true master, taking his time, and lets the characters breathe and the atmosphere build up. Filming the characters and the modernist, cube-like architecture of newly built churches with a hand-held camera in cold tones while using almost no background music at all, Schmidt aims for a realistic effect that will only be broken in the emotionally tense final scene, with Miran’s beaten-up face reflected in the rear-view mirrors of his motorbike. Keeping in mind the intensity of it all, Agape is a film that demands some time to settle in the viewer’s mind.

Another of the film’s strong points is the acting. Almost all of the hard work had already been done once a well thought-out cast had been chosen and other preparations had been made, including vocal coaching for the two young Serbian actors. The only thing Schmidt had to do was have enough faith in his actors, which he does. Bogdan is capable of plumbing emotional depths, expressed solely through his facial expressions, whilst Murić has a bright future ahead of him, since he is capable of sharing the frame with almost any actor without being intimidated or out-acted. The dynamics between him and Čemerikić work well, and the performance by veteran Croatian actor Ivo Gregurević as a pragmatic bishop is a particularly nice touch.

Agape was produced by Zagreb-based Telefilm and will be distributed by Croatian Radio and Television (HRT).

Cineuropa sat down to talk to Branko Schmidt about his latest film, Agape, now hitting national and regional screens

Review: Even Pigs Go to Heaven

Agape: The love of God in an intolerant society

Veteran Croatian filmmaker Branko Schmidt’s film, which premiered at Pula, is a powerful critique of a failed society through the lens of the church, religion, labels and violence 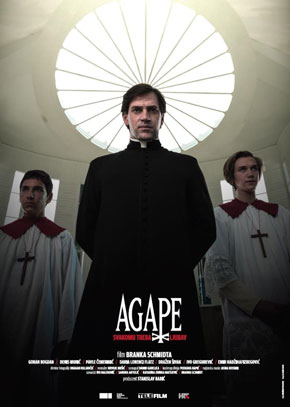 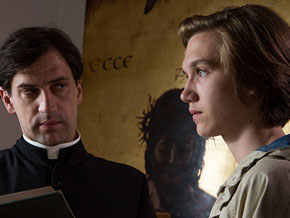 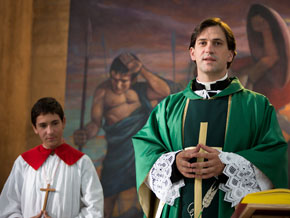 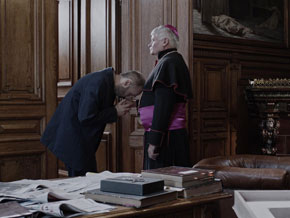