10/08/2017 - LOCARNO 2017: Ben Russell presents his latest film, a journey into the depths of humanity that lies somewhere between shamanic ritual and collective brutality

The US artist and director Ben Russell is a familiar face at the Locarno Festival where he previously presented A Spell to Ward Off the Darkness [+see also:
trailer
film profile] in 2003, co-directed with Ben Rivers in the Signs of Life section. But this time he’ll be coming face-to-face with the International Competition audience, which has had rather a unique experience, beyond appearances and into an abyss, thanks to his film Good Luck [+see also:
trailer
film profile],

The film begins with a song played by a mysterious musical band. As the song comes to an end, the light disappears and Ben Russell's gaze drops 600 metres below ground into the bowels of the earth, accompanied by a group of Serbian miners. It’s thanks to the art of cinema that Good Life is able to highlight the lives of those who would normally be relegated to the shadows. The second group of men observed by Russell is that of the illegal Suriname miners (gold diggers).

Good Luck plunges the audience into the hard, precarious world of two distinct groups of workers, showing us the importance of the bond that unites them despite the various difficulties and insecurities that they face. "What we would like is a better life and a higher, more appropriate wage," these are the dreams of the Serbian miners who find it difficult to express their feelings, laughing about them as if their concerns were too trivial to deal with.

For Ben Russell there's no obvious distinction between documentary and fiction. It's almost as if Russell wants to remind us that the illusion of "total realism" is nothing but a foolish goal that ultimately loses sight of the essentials: cinema is first and foremost a collective experience that allows us to observe reality from a different point of view.

Russell's films are demanding on the body, not just the mind, awaking us from a dullness that blinds us and leaves us out of sync with our physical emotions. The body is able to more directly express what the mind sometimes experiences a delay in processing. The body does not lie. Good Luck definitely draws out some decisively physical emotions: the length of its sequential shots seems to remind us that "time" is cruelly relative (miners work for more than eight hours a day in the abyss and we, the audience, struggle to even sit and watch them for any longer than two hours). The protagonists' faces (filmed almost as if they were prole versions of the Warholian screen test) look at us, claiming their presence, even if we have long forgotten them. Ben Russell provokes the audience, and we find ourselves part of an experience that we won’t come out of unscathed.

The director does not want to impose a so-called "universal" truth on the audience, but rather his own personal truth, his vision of the world. Despite some undeniable influences: John Marshall, Jean Rouch, Ben Rivers, but also Maya Deren and her ritual cinema, among the ethnography and ceremonies related to possessions, Ben Russell proposes something totally new and personal. In his most recent work "rituals" are not, as in the case of Deren, related to ceremonial practices per se, but are instead found in the collective support of miners, in their repeated, mechanical and persistent gestures, as if they are almost wishing to get rid of their bodies.

Through his "ethno-experimental" cinema Ben Russell opens our eyes to the absurdities that have invaded our consumer society, the ever-growing gap that is created between those who dominate the world and those who, apparently, have no option but to silently submit.

Good Luck was produced by KinoElektron and CaSk Films, with Stray Dogs responsible for international sales.

LOCARNO 2017: Ben Russell presents his latest film, a journey into the depths of humanity that lies somewhere between shamanic ritual and collective brutality 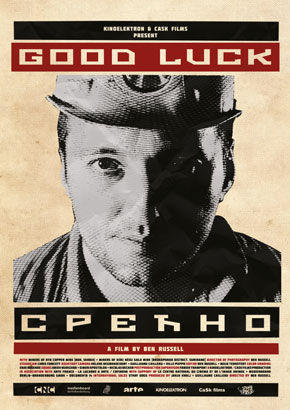 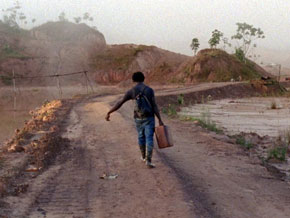