04/10/2017 - In her first film, the Belgian comedian delivers a fictionalised, open-hearted self-portrait that whisks us from the working-class high rises of Brussels to the spotlights of Paris

In her first film (presented at Namur's FIFF), Stand-Up Girl! [+see also:
trailer
interview: Nawell Madani
film profile], led and embodied by her from A to Z, Nawell Madani delivers a fictionalised self-portrait of her unusual journey, one marked by perseverance. Her alter-ego, Lila, grows up in the high-rises of the Marolles in Brussels. Along with her sister and her friends, she dreams of becoming a dancer and revolutionising the world of hip-hop. But we don’t all succeed in achieving our dreams. While her friends stay in Brussels, Lila leaves everything - comfort, family - behind to go to Paris, where she is certain her persistence will pay off. Except that life in Paris quickly takes an unexpected turn. The woman who dreamed of being a choreographer ends up as a lap dancer in a rap video, and that’s only the beginning of her disillusionment. After a chance meeting with a drama teacher, played by François Berléand, she bears her heart and soul on stage and begins doing stand-up. This time, her unusual dedication leads her to find her calling. However, she still has to fight one final battle: convincing her father that she has made the right choice.

Madani has invested herself completely in this film project. Not wanting to trust anyone else with the story of her life, or its writing or direction, she dove right into the deep end by taking on multiple roles. Along with working as screenwriter, director (the film is co-directed with Ludovic Colbeau-Justin) and actor, she also created the film’s (spectacular) choreography. In the world of hip-hop dance, as in stand-up, the heroine is confronted by the crass sexism of her peers. Despite her obvious talent, she must prove herself again and again. Scores may be settled with humour and wisdom, but they are nevertheless settled. Madani comes hurtling into cinema, after a small role in Alibi.com [+see also:
trailer
film profile], with all the verve and communicative energy of her experience in stand-up and her one-woman show.

Though you do expect to laugh during Stand-Up Girl!, at least when you are subjected to the young Belgian’s humour, you don’t expect to cry, or at least to be moved by the relationship between Lila and her immediate family: her father, a taxi driver, and her sister, who moves away from dance to get closer to God - and to love. This is in a large part thanks to the direction of the cast. The director has enlisted a host of non-professional actors in her project, who are for the most part impressively authentic, especially Mimoune Benabderrahmane, a former Uber driver who plays a widowed father torn apart by the contradictory aspirations of his two daughters. François Berléand plays the Pygmalion role of the guide who accompanies the young hopeful from the shadows to the limelight. This film has the virtue of shedding light on two worlds that still rarely appear in French-language film: going behind the scenes of the casting and video shoots of hip-hop dance, but above all the world of stand-up. Largely inspired by the Jamel Comedy Club, the Stand Up Show portrayed here by Madani is a world of predators where the competition is extremely fierce and where the direct or collateral victims are left by the wayside.

Stand-Up Girl! was produced by Nexus Factory (Belgium) and LGM Cinéma (France). It is being distributed in France by UGC and in Belgium by Distri7, and will be released in the two countries on 29 November.

(Translated from French by Margaret Finnell)

We met up with Belgian actress and comedian Nawell Madani, whose debut film, C'est tout pour moi, is released today in France and Belgium

In her first film, the Belgian comedian delivers a fictionalised, open-hearted self-portrait that whisks us from the working-class high rises of Brussels to the spotlights of Paris

The Valois d'Or 2017 through the viewfinder at Angoulême 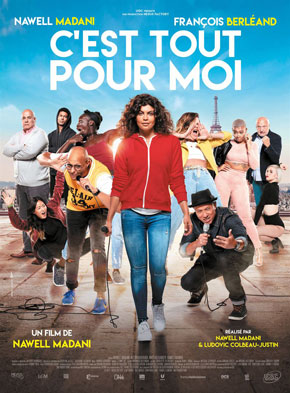