22/11/2017 - Marc Recha's new film, which world-premiered at Gijón, returns to delicately dive into a childhood world and imaginary universes

As in his previous film A Perfect Day to Fly [+see also:
film review
trailer
film profile], the film's protagonist is one of the director's dearest friends, Sergi López, but despite the main character being played by the director's son in his previous film, this time an intense casting session took place on the island of Minorca, where the film's action takes place, leading to the discovery of two new faces: the expressive, bright and lively young Mariona Gomila and Macià Arguimbau, who are both debuting in cinema without any previous acting experience. Much of this success is down to the actress Nuria Prims, happily retrieved from Agustí Villaronga's film, Uncertain Glory [+see also:
film review
trailer
interview: Agustí Villaronga
film profile], to embody a mysterious character without a line of dialogue. During breaks in filming, Nuria took it upon herself to teach the children the art of acting and how to be natural in front of the camera.

Similarly to Recha's previous film, despite taking place at the end of World War I, La vida lliure was filmed on a shoestring budget. Instead of lowering the director's self-esteem, this limitation instead stimulated his desire to make the most of what he had at his disposal, especially as the natural scenes from the screenplay he wrote himself pan out, inspired by a specific time and place: Minorca affected by a lethal illness, famine and the emigration of its people. It's in Minorca, while their mother heads abroad in search of sustenance, that the two siblings - Guilla and Arguimba - live with their grandfather (Miquel Gelabert), devoting much of their time to roaming about his house.

In this landscape, filled with pine trees and beaches, the children’s' imaginations build fantasies populated by fantastic beings, until they discover Rom (López), a man who lives in the rocks, by the sea. They’re not sure whether he is a fairy tale ogre or a fantasy hero, but complicity and friendship are quickly born among them. Rom tells stories of submarines and Nazis, while watching a sailboat anchored in the nearby waters, where a beautiful and enigmatic woman regularly steps out onto the bridge.

Recha, in his usual intimate, modest and naturalistic way, seeks to capture the intangible, returning to portray a childhood world and its imaginary universes, dressed up here like an adventure novel with pirates and the various threats of death and destruction that surround this immaculate place, invented by the minds of the little ones and supported by the narration of the little girl. Accompanied by music written by his brother, Pau Recha, the director offers us a faraway picture postcard of the island of Menorca, while at the same time calling for the preservation of that very landscape, along with its memory and its local farming community. The result is an extraction of the creative, evocative, and emotional freedom which his nostalgic title alludes to.

Filmed in just 15 days, La vida lliure is a Turkana Films and La Perifèrica produccions production, with support from Televisió de Catalunya and IB3 Radiotelevisió de les Illes Balears. Splendor Films among others. Splendor Films is due to distribute the film in Spain.

"It's the compulsive way I make films"

Marc Recha presents his latest film, La vida lliure, and reveals some of his keys to interpretation

From 4-10 December, the Catalan city will once again be delighting locals, professionals and visitors alike by screening and promoting the most intensely youthful, courageous and innovative films

Marc Recha's new film, which world-premiered at Gijón, returns to delicately dive into a childhood world and imaginary universes

With the announcement of ten new films, the Baltic gathering has completed the list of the 18 movies that will be competing for the Grand Prix

After being shot in autumn 2016, the new film by the director of A Perfect Day to Fly is now in the middle of post-production with a view to taking part in this season’s choicest festivals 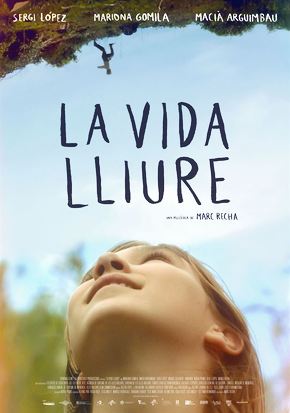