Il vegetale: The wisdom of youth

18/01/2018 - Gennaro Nunziante’s first solo endeavour without Checco Zalone stars Fabio Rovazzi in a comedy without many stand-out features, but with a powerful political message: honesty can change the world

The duo promised something exciting: a director who has raked in millions at the box office and the star of a fair few smash hits, working together for the first time on a film with a decent production budget aimed at a diverse audience (read the news here). Instead, the highly-anticipated new film by Gennaro Nunziante, Il vegetale [+see also:
trailer
film profile] (lit. The Vegetable), his first film without companion Checco Zalone (bringing in €65 million at the box office with Quo Vado? [+see also:
trailer
making of
film profile]), starring YouTuber Fabio Rovazzi, adored by teenagers, in his debut performance, doesn't quite hit the mark. A comedy that puts a different spin on the mainstays of chronic unemployment and the frustration of graduate job-seekers, spicing them up with impossible love and a family in ruin, and transforming them into a somewhat discrete film ("the audience will be amazed, even those with an education," stated Nunziante, who, along with Zalone, had got us used to something altogether more trivial), which unfortunately struggles to keep our attention for its 90-minute running time.

Il vegetale is a comedy like many others, but with a political message that makes it a little more interesting. The youth of today has inherited an ugly and miserable world, but it is within their power to roll up their sleeves, fight moral and economic decline with honesty and good will, focus on human relationships and re-educate the older generation on lost values. 24-year-old Fabio (Rovazzi) is a graduate student, but the only job he can find in Milan is giving out flyers. He’s so good at it, however, that he is offered a "promotion": an internship in the countryside picking tomatoes. But not before he accidentally, due to his excessive honesty, sends the construction site belonging to his father (Ninni Bruschetta) down the drain, a fraudulent bon vivant who has remarried a beautiful Russian woman and fathered a spoilt and overbearing daughter (Rosy Franzese) – ending up in hospital in the meantime. Just like Cinderella struggling with an absent father and an evil stepmother and step-sisters, good-natured Fabio must overcome a fair few difficult situations, but ultimately finds his way, infecting everyone with his confidence and optimism as he goes (the cast also stars Paola Calliari, Alessio Giannone, known as Pinuccio online, and Luca Zingaretti from the TV series Montalbano).

"It's a film about reconciliation," clarified Nunziante at the premiere in Rome, "this country isn't going anywhere unless we reconcile, and Fabio's character manages to bring together something that initially seemed impossible." His intentions were seemingly good, it’s a pity, then, that the film doesn’t develop entirely successfully. Rovazzi’s naïve character does work, but the screenplay, written by the director, piles various situations on top of one another, jumping from one context to another, leading the audience down one path before changing direction. The production of Il vegetale, totalling €5 million, was complex ("the film sets popular social issues within a comedic context," stated the production notes, "this is one of the reasons why the screenplay has been revised several times and, while filming, we tried to adhere to a story that developed as we went,"), which is admittedly very apparent on screen. The initial result of Nunziante and Zalones’ "divorce" has been a bit of a disappointment. And so, we eagerly await the next attempt by the irreverent comedian from Bari, who will also be donning his director's cap in a film due to be released in 2019.

Il vegetale: The wisdom of youth

Gennaro Nunziante’s first solo endeavour without Checco Zalone stars Fabio Rovazzi in a comedy without many stand-out features, but with a powerful political message: honesty can change the world

The latest film to be written and directed by Gennaro Nunziante, a director who racked up record box-office admissions with Quo vado?, will star the young Italian chart-topping singer 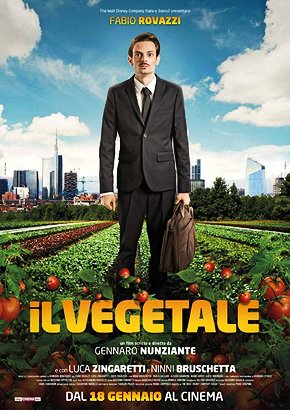