Gaspard at the Wedding: The ties that bind

30/01/2018 - Antony Cordier unveils a refreshing film about emotional ties, with a surrealist yet human sense of humour

Félix Moati, Christa Théret and Guillaume Gouix in Gaspard at the Wedding

"- Growing up in a zoo! The luck you've had! – If you like…" By setting the plot of his new film, Gaspard at the Wedding [+see also:
trailer
interview: Antony Cordier
film profile], in a zoo, (released in France on 31 January by Pyramide) Antony Cordier offers up a space for playful expression, where paradoxically it is human bestiary that holds the limelight. After Judo and his love triangle in Cold Showers [+see also:
trailer
film profile] (Directors' Fortnight 2005) and swinger couple in Happy Few [+see also:
trailer
film profile] (in competition at Venice in 2010), the filmmaker humorously cements his attraction to a universe that deviates from the norm in his latest film, as well as his preference for a form of physical freedom that's not without some psychological tension. An originality that is very charming, and that makes the film somewhat hard to pigeonhole, a hybrid, zigzagging between genres, simultaneously feeling like a crazy comedy, romance and a family drama about inheritance, all with a hint of a fairy tale about it and the zest of a nature documentary. A mixture that allows itself to be very daring (by bringing risks into a narrative and rigorously mastered formal style), and which totally embraces its bohemian side, something that could perhaps deter purists of one particular style or another, or proponents of rigid perfection, but not this viewer, who found the end product to be very sympathetic and refreshing.

Divided into four sections ("the imaginary girlfriend," "the fella of a single woman," "the girl who ate roots" and "Epilogue: The favourite"), the film opens with an entirely improbable meeting between Gaspard (Felix Moati), exiled to Brussels, and Laura (Laetitia Dosch) who leads a somewhat nomadic life in France. Laura chains herself to the railway lines with a group of activists she barely knows, blocking the train Gaspard has taken to attend his father's second wedding. After some umming and ahhing, Gaspard asks Laura, in exchange for compensation, if she will pretend to be his girlfriend at the wedding ceremony. A curious offer, the intricacies of which are revealed the film progresses. Because Gaspard's family is very particular, with his charismatic and idealistic father Max (Johan Heldenberg), his attractive sister Coline (Christa Théret), his Cartesian brother Virgil (Guillaume Gouix) and his future mother-in-law and vet Peggy (Marina Fois). And let’s not even talk about his dead mother, devoured by a tiger... Because this zoo, which exists in a vacuum, is where this small world has existed for many years. A zoo that is now on the brink of bankruptcy, where emotional ties will be strengthened, but not without difficulty, while everyone tries to be themselves without rejecting the family’s common ground...

The screenplay, written by Antony Cordier with the collaboration of Julie Peyr and Nathalie Naje, is very inventive and manages to maintain the balance of a film that, like its characters, goes in two opposite directions, that of popular cinema and that of auteur cinema, with unbridled comedy and muted melancholy, in an abounding approach that sometimes finds itself in some fairly small air pockets without consequence. Filmed with great agility and starring a cast in stimulating roles, Gaspard at the Wedding delves into a cheerful animality that addresses even the most delicate subject of incestuous feelings, a question that has paralysed many previous commissions during the financing process, but which, whatever one’s opinion, "doesn’t threaten the species" as a certain character puts it, nor this light-hearted and very pleasant film.

Produced by Agat Films (France) and co-produced by Artémis Productions (Belgium), Gaspard at the Wedding is sold internationally by Pyramide.

more about: Gaspard at the Wedding

“It was the time for boldness. There was no holding back”

French filmmaker Antony Cordier talks to us about his third feature, Gaspard at the Wedding 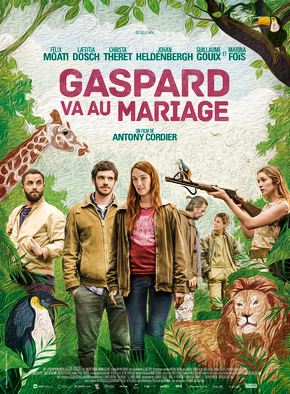