13/05/2018 - CANNES 2018: In her treatment of the subject of female Kurdish fighters, Eva Husson succeeds in communicating a strong message, but unfortunately fails to convey the finer points

Emmanuelle Bercot and Golshifteh Farahani in Girls of The Sun

"Women, Life, Freedom". This is the chorus sung on the eve of battle by women holding guns and wearing fatigues - the women on which this second full-length film by French filmmaker Eva Husson focuses. Thrust into competition at the 71st Cannes Film Festival with her film, Girls of the Sun [+see also:
trailer
interview: Eva Husson
film profile], the chorus perfectly summarises the laudable intentions with which this director has approached the moving and military subject of her second full-length film, following on from the well-received Bang Gang – A Modern Love Story [+see also:
film review
trailer
interview: Eva Husson
film profile]. But the simplifications which Husson has been forced to enact in rendering the complex mosaic of the war-torn Sinjar region (in north-western Iraq and close to the Syrian border) as played out between August 2014 and Autumn 2015, leave much to be desired and the very American cinematic style that has been adopted in the making of this film in spite of the crew’s distinct lack of means, gives mixed results. This in no way detracts from the significance of the film’s message, denouncing the violence used against women and flying the flag for the strength they demonstrate in moving beyond their suffering to face up to their oppressors.

Initially following in the footsteps of Mathilde (Emmanuelle Bercot), a much-experienced French war reporter, wounded in the flesh (she lost an eye in Homs) but also weakened in spirit by her family situation (we will later learn that her husband, also a journalist, was killed in Libya three months earlier and that ever since their child suffers from anxiety attacks), we arrive very quickly (by helicopter, over lavish mountain landscapes) at the scene of the action. Kurdish forces await international coalition air support to take back a town from Daesh. Mathilde is, at this time, embedded in a very particular battalion commanded by Bahar (Golshifteh Farahani) who is, in reality, the central character in this tale. These soldiers are, in fact, former captives of the men in black who, in the surrounding villages on 3 August 2014, rounded up in excess of 7,000 women and children. Women like Bahar whose husband died before her eyes, whose young son was taken from her, and who was herself sold, before being sold again, passing from one rapist-torturer to another, before finally managing to escape with outside help. All of these events are revisited via flashbacks while, in the present day, an attack is being prepared, and then it finally happens, propelling Bahar, her small group and Mathilde as a witness, into the path of flying bullets, the mire of unexploded mines, the rain of bombshells, and the claws of death…

Having opted for the heroization of her lead character, Eva Husson drives the plot forward effectively, with the trips back into Bahar’s past turning out to be the real strength of the film, which has also revealed Golshifteh Farahani to be a fine actress. However, the flatness of the supporting characters and the storytelling shortcuts have a detrimental effect on the rest of the film. The action sequences, meanwhile - shrewdly on the minimalist side - fail to reach the usual intensity levels of American war films or of documentaries which have previously focused on the capturing of towns by Kurds. Flaws which the film only manages to overcome in certain moments (or which it tries to do with the help of its omnipresent music), but these flaws happily fall short of entirely discrediting the film on account of the poignant reality which is its inspiration.

more about: Girls of the Sun

“Throughout history, women have always been warriors”

CANNES 2018: Cineuropa met up with Eva Husson, the director of Bang Gang and now also Girls of the Sun, which has screened in Cannes’ Competition

The major distributor of European arthouse films in Slovakia and the Czech Republic has overhauled its strategy, although the Be2Can festival remains its annual fixture 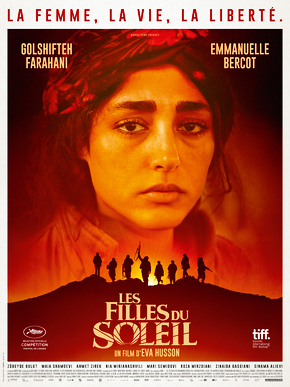 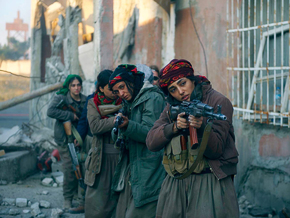 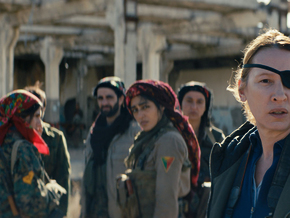 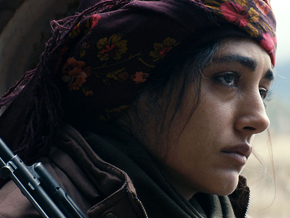 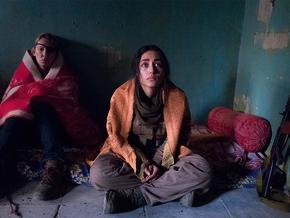