Polish filmmaker Grzegorz Zariczny broke out internationally when his short observational documentary The Whistle won the Grand Jury Prize at the 2013 Sundance Film Festival. In 2016, he competed at Karlovy Vary with his first fiction feature, Waves [+see also:
film review
trailer
interview: Grzegorz Zariczny
film profile], which also demonstrated his keen eye for teenage characters. His latest film, the 53-minute documentary The Last Lesson [+see also:
trailer
film profile], which has just world-premiered at the Krakow Film Festival, seems like a natural extension of his interests and approach.

Set in a Krakow secondary school, the film follows a class that is about to graduate. It opens with the inevitable yearbook photo session, giving us our first glimpse of about a dozen protagonists that Zariczny will observe throughout the film. The soon-to-be graduates attend mathematics, history, literature, sociology and religious education classes. During the break times or after school, we see them talking among themselves about all the themes that teenage kids on the brink of adulthood are concerned with: love, sex, friendship, how they are treated by their classmates, and their dreams and future lives.

Particularly poignant are the segments in which two best pals – neither of them "cool" or "popular" – talk about their experiences of bullying and their attitude towards life. On the other hand, an especially candid sequence shows a boy and a girl, both clearly attractive and popular, discussing their break-up from last Christmas, and how they are dealing with their new partners. And then there are a couple of boys' “locker room” conversations, paired with a chat between their female counterparts about romance and sex.

Fully observational, The Last Lesson gives us a well thought-out glimpse of the Polish youth of today. But while one might expect, in the recently created climate of deep division in this very Catholic country, a stronger emphasis on the civil education and religion classes, Zariczny does show these to us but refrains from imposing opinions, or even highlighting the issues that his natural audience (documentary aficionados who swing predominantly to the left) might consider an intrusion from state policy into the education system.

Yes, there is a priest giving lessons, but the discussions are kept to a very civil, reasonable tone – and maybe only the most militant atheists would have a problem with the content of these scenes. That is, if we disregard the issue that Catholic catechesis classes are mandatory in the Polish education system, and more prevalent in number than those of the natural sciences combined. This is a fact of life in Poland, and Zarizcny, who wrote, edited and directed the film, observes it all without judging it.

The Last Lesson is a film that manages to both bring the viewer back to his own teenage years, eliciting an unavoidable cluster of memories and emotions, and send a clear message that the youth of today is no worse nor better than any that came before it – if the viewer is honest with him- or herself.

The Last Lesson is a production by Katarzyna Zariczny Produkcja Filmowa.

more about: The Last Lesson 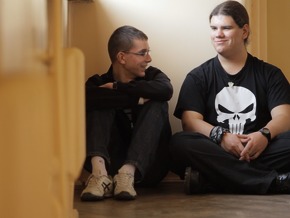