In Santa Maradona, Marco Ponti’s previous film, protagonists Andrea and Bart (Stefano Accorsi and Libero De Rienzo) dream of a life filled with recklessness, police chases and Bruce Willis-style acrobatics. Seventeen years later, the same director seems to have granted them their wish with his new feature film, Una vita spericolata [+see also:
trailer
film profile], the ideal adrenaline-packed sequel to that beloved generational film (which won him a David di Donatello award for Best Directorial Debut back in 2002). However, this time, Ponti’s back with a new cast, a fresh style and entirely different results.

The film stars two young men in their late twenties who are lifelong friends and somewhat down on their luck. Rossi (Lorenzo Richelmy, recently seen in Rainbow - A Private Affair [+see also:
film review
trailer
interview: Paolo Taviani
film profile] by the Taviani brothers) runs a garage and is riddled with debts, while BB (Eugenio Franceschini, who took over from Domenico Diele after he was arrested for death by dangerous driving just three days after filming commenced) is a former rally champion who dreams of escaping to Copacabana. One day, Rossi finds himself unwittingly involved in a robbery after going to the bank to ask for a loan, before being declined (apparently banks don’t dish out money to poor folk like him). A series of absurd events follows, resulting in him leaving the bank with a suitcase full of cash and a hostage in tow, Soledad (Matilda De Angelis, appreciated for her performance in Italian Race [+see also:
film review
trailer
interview: Matilda De Angelis
interview: Matteo Rovere
film profile]).

It just so happens that Soledad is a well-known soap opera actress and the robbery soon gets full-blown media coverage. And so begins a daring escapade that takes them the entire length of Italy, from Piedmont to Puglia, where the three good-looking rebels are pursued by the police, captained by a "bad lieutenant” coke addict (Massimiliano Gallo), as well as the original owners of the two million euros they stole – bad guys Michela Cescon and Mirko Frezza. Somewhere between a spaghetti western and pulp film – with its high-speed car chases, shootouts and severed fingers – the director (who also wrote the screenplay) seems to have a lot of fun with the film’s dialogue and its three main characters: Soledad, an uninhibited and unscrupulous ‘dark lady’, BB, super cool and never without a cigarette poised between his lips, and Rossi, who always seems to be on the verge of a nervous breakdown. However, some of the gags don’t quite work and some events are slightly unbelievable (it's summer, 40 degrees outside and Rossi and BB decide to return to the "scene of the crime" wearing hats as a disguise?), while the characters’ occasionally caricatured excesses – including those of the film’s secondary characters – don’t exactly hit the mark.

A love triangle, social criticism, gangsterism, wacky comedy and #MeToo, Una vita spericolata has a little bit of everything. Actor Richelmy described the film as "experimental" during its premiere in Rome, while De Angelis stated that it was "a film that you either don’t get or that you get on board with from the get-go.”

01 is due to release the film in Italian cinemas on 21 June. The film was produced by the outfit Italian International Film, along with Rai Cinema. Rage Against the Machine’s Tom Morello provided the film’s soundtrack.

Matilda De Angelis, who played a daring racing car driver in Italian Race, takes on the role of a young dark lady in the Piedmontese director’s film road movie 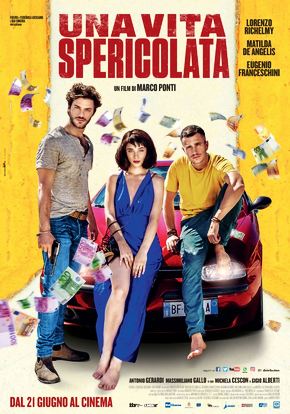