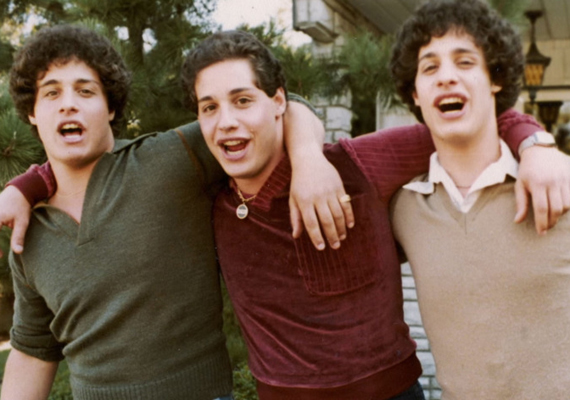 Director of Film4 Daniel Battsek, Sidney Kimmel Entertainment (SKE) president John Penotti and Raw’s Dimitri Doganis have announced that Raw, which produced the Sundance breakout documentary Three Identical Strangers [+see also:
trailer
film profile], will partner with the other two firms on a feature-film adaptation of the documentary after the acquirement of the life rights of Robert Shafran and David Kellman, two of the identical triplets at the heart of the documentary. Raw’s Katherine Butler and Dimitri Doganis and SKE’s Sidney Kimmel and John Penotti will produce the as-yet untitled narrative feature. Film4’s Daniel Battsek and Sam Lavender, Submarine’s Josh Braun and Dan Braun, and the doc’s director, Tim Wardle, will serve as executive producers. Mark O’Connor will oversee development on behalf of SKE.

Raw’s original documentary feature Three Identical Strangers premiered at the Sundance Film Festival and was awarded the Special Jury Prize for Documentary Storytelling. The movie, directed by Wardle, and financed and executive-produced by CNN Films and Channel 4 (UK), was the highest-grossing limited-release documentary, per screen, of the year thus far on its opening weekend. Currently nearing $3 million at the US box office, the film is still expanding into more cinemas. CNN Films retains the US television rights to Three Identical Strangers. Neon, which acquired the North American distribution rights from CNN Films, released the documentary on 29 June. Channel 4 has the UK TV rights.

Set in New York over several decades, Three Identical Strangers documents the fascinating true story of Shafran, Kellman and Eddy Galland, three complete strangers who inadvertently discover that they are identical triplets separated at birth. When the 19-year-olds' joyous reunion catapults them to international fame, it also sets a chain of extraordinary and disturbing events in motion.

Film4’s Daniel Battsek commented, “Robert, David and Eddy’s extraordinary story made a huge impact on me when I saw Three Identical Strangers at Sundance. We were all struck by its dramatic potential and look forward to the challenge of capturing the emotion and revelations of the triplets’ journey with our partners at Raw and SKE.”