This is a big summer for Hungarian filmmaker László Csuja: at Karlovy Vary, his first feature-length fiction film, Blossom Valley [+see also:
film review
trailer
interview: László Csuja
film profile], world-premiered in the East of the West section, and just one month later, his Nine Month War [+see also:
trailer
film profile] bowed in the Documentary Competition of the Sarajevo Film Festival, winning the Special Jury Prize to boot. And while the former is a story of two misfits set in Budapest and the latter takes place during the Ukrainian-Russian war, both deal with young people, their lives and the decisions they make in certain social circumstances.

When the war in Ukraine started, most potential conscripts from the Hungarian minority living there ran away to the EU – but not Jani, the 24-year-old protagonist of Nine Month War. Despite living what looks to be a relatively comfortable life in a small town in Western Ukraine with his mother, who works at a convenience store, and being in love with an 18-year-old girl he gets engaged to early on in the film, it appears that Jani wants to prove something. Of course, his mother is worried, and his fiancée must be, too (although she rarely pitches in to say anything to support either of the possible decisions), but perhaps this is what provides such a strong impetus driving Jani to the frontline.

So off he goes, and the film splits into two alternating parts: observational footage from Jani's home, where we see how his mother and her future daughter-in-law are getting by and coping with Jani's absence, and mobile-phone videos that he is making himself. It is precisely between these two distinct visual styles that the story is told and enhanced by the discrepancy between the quality and urgency of the two styles of footage.

In the beginning, these mostly vertical videos are vibrant with enthusiasm and comradeship between Jani and other soldiers. But as the weeks and months go by, the mood rapidly starts to deteriorate: our hero is shocked by the living conditions in the army camps; then there are actual skirmishes and battles that he describes, and he is even starting to look different with his new beard.

When Jani comes home on leave, we do see that he has changed. He is more decisive but also more brusque, and gets irritated easily, especially with his mother's constant worrying and questioning of his decision. This leads to a major argument that even borders on the ridiculous – showing how in trying to prove that he is a real, independent man, Jani actually acts more childishly than ever. After an attempt to prolong his leave fails, he goes back to the frontline, and the videos we get to see now are increasingly disturbing, as he describes a co-fighter's death at his own hands…

Nine Month War is an accomplished and intriguing look at how youngsters imagine what it means to be a man and why they decide this is something they want to prove. Objectively, Jani's mother does not seem that overbearing or demanding, and viewers will probably actually relate more to her than to her son – who does not seem to have proven much more than what we already know.

Nine Month War is a production by Hungary's ELF Pictures and is handled internationally by Germany's Deckert Distribution.

“Fortunately, none of the actors read the script” 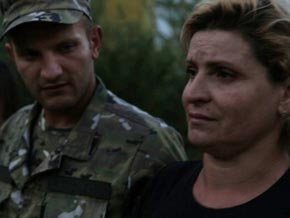