Review: Why Are We Creative?

02/09/2018 - VENICE 2018: German director Hermann Vaske asks myriad celebrities the same question – and gets too many answers

It was on a night out with his colleagues at advertising agency Saatchi & Saatchi London that an inebriated Hermann Vaske first asked out loud: “Why are we creative?” It caused much excitement, and rather than forget about it in the morning, it kick-started an unstoppable train that led to Vaske travelling around the globe asking celebrities about creativity and making a film about it, aptly titled Why Are We Creative? [+see also:
trailer
interview: Hermann Vaske
film profile]. The movie is screening in Venice’s Giornate degli Autori.

Vaske is not the first person to wonder what drives humans to art and creativity – after all, it’s one of the things that separate us from animals, and while John Carey’s What Good Are the Arts? and Italo Calvino’s Why Read the Classics? take a highbrow approach to the subject, Vaske keeps it simple, relying on our fondness for his interviewees to maintain our interest.

Vaske has loosely compartmentalised the interviews by the nature of the response. So the film throws all those who talk about sex together, groups people who see creativity as a political act with each other, and blends together others who see creativity as something inherently human. As Picasso famously recounted, “Every child is an artist; the problem is how to remain an artist once we grow up.” Naturally, this is followed by architect Zaha Hadid stating, “Don’t think you are born with it; you have to work hard.”

The interviewees come from a number of spheres, mainly film, but also music, cooking, art and architecture. It starts with a 1995 interview of David Bowie, who Vaske keeps returning to throughout the film. The director also sneaks in some interview subjects that are a window into his own previous work, so from his 2012 film Balkan Spirit are artist Marina Abromovic, philosopher Slavoj Zizek, director Emir Kusturica and actress Angelina Jolie. From his 2016 effort Dennis Hopper: Uneasy Rider we see Diane Kruger, Wim Wenders and Julian Schnabel, and from his 2006 production The Art of Football is John Cleese.

It’s a simple concept that works because of the range of responses. Game of Thrones scribe George RR Martin talks about creativity by citing Jungian theories on the parts of the brain, British artist Damien Hirst makes a childish drawing, while Jim Jarmusch turns his head like a dog to see alternative perspectives. Of course, there is no definitive answer, or right answer, and the beauty of the question is in the ambiguity and range of responses available. But it runs out of steam as it becomes clear that Vaske is not interested in forming his own hypothesis using the gathered responses.

Why Are We Creative? is an Emotional Network production, in cooperation with ZDF/3sat. The international sales are handled by Celluloid Dreams.

more about: Why Are We Creative?

"A question that became a kind of obsession"

VENICE 2018: German director Hermann Vaske has filmed the most important artists and intellectuals for Why Are We Creative?, a special event in the Giornate degli Autori

Two contenders for the Golden Lion at Venice for Celluloid Dreams

On the Lido, the French company will be selling The Painted Bird by Václav Marhoul and Babyteeth by Shannon Murphy, spearheading a rich line-up of projects

Review: Why Are We Creative?

VENICE 2018: German director Hermann Vaske asks myriad celebrities the same question – and gets too many answers 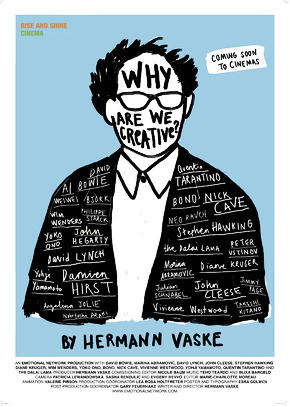