02/09/2018 - VENICE 2018: The first Indian film (Swedish co-production) to open the International Critics’ Week is an adventure film that surrenders its soul to Hollywood fakery

Tumbbad [+see also:
trailer
interview: Rahi Anil Barve
film profile] by Rahi Anil Barve and Adesh Prasad, the first Indian film (in co-production with Sweden) to open the International Film Critics' Week at Venice in special session, has all the ingredients of a successful family adventure film: a fairytale, legendary treasure, a curse that is passed down from father to son, a monumental and disturbing house (Tumbbad Castle), disgusting, thorny and slimy monsters from the attic to the cellar, terrifying underground passages and tunnels, and a lot of fighting scenes...

This visually striking feature film, which clearly feels like a Hollywood production (its nightmarish decor is emphasised by a soundtrack full of wet and soft noises and piercing sounds), makes reference to a host of distinguished American productions: Game of Thrones, thanks to its feudal atmosphere (the very first, successful scene, which provides an important contextual element regarding the subjugation of women in the narrative world, is somewhat evocative of The Handmaid's Tale), the Indiana Jones saga, every time we travel a path strewn with pitfalls towards whatever is hidden under the house... All the ingredients are there in abundance, but it lacks originality, and the cult motifs held together by a photography that adheres (too) perfectly to Hollywood standards are not backed up by a well-executed screenplay that succeeds in maintaining the audience's attention, while offering them some surprises along the way. The crux of the plot (announced at the beginning of the film via a voice-over) may be a cyclical curse, but the narrative is still repetitive, from one excursion to visit the Tumbbad demon to the next. And the story’s somewhat unoriginal "moral" (which is basically that greed doesn't lead to anything good) is not the result of any sort of demonstration: it's identical both at the beginning and end of the film.

A real and singular axis around which the film could have developed is well sketched out, but only partially. Indeed, in Tumbbad there is an attempt to present the history of India in parallel with the fairy-tale curse, but it’s only partially executed and rather awkward, as is its focus on patriarchal society and the position of women, even if some of the elements are there. In short, it's a shame that the film's Indian anchoring, which could have been its hook, is lost in a sea of familiar treks across the Atlantic (the little snippets of India we do see, the hero's home, for example, correspond to an image we are all too familiar with) and a desire to make a film that appeals to an international audience, as meticulously produced and visually spectacular as it may be.

Tumbbad was produced by the Indian company Colour Yellow Films with Swedish banners Filmgate Films and Film i Vast. The film's international sales are handled by Eros International.

“Vinayak’s story mirrors the transformations that were happening in India”

VENICE 2018: We chatted to Rahi Anil Barve, the co-director of the Indian-Swedish title Tumbbad, which opened the International Film Critics’ Week

VENICE 2018: The first Indian film (Swedish co-production) to open the International Critics’ Week is an adventure film that surrenders its soul to Hollywood fakery 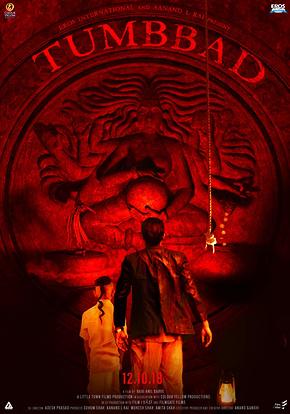