El Pepe is the guerrilla-style cognomen of former Uruguayan President José Mujica, who led the South American country from 2010 to 2015. Double Palme d’Or-winner Emir Kusturica started work on a film when Mujica was in the last months of his presidency. A series of conversations between the two titans is the backbone to El Pepe, a Supreme Life [+see also:
trailer
interview: Emir Kusturica
film profile], the film playing out of competition at the Venice Film Festival.

As they chat, we also witness El Pepe cook, walk his dogs and demonstrate his love for horticulture. The ‘supreme life’ in the title suggests a film that recounts the details of El Pepe’s life in order to paint a picture for the audience of what makes him extraordinary, however viewers expecting a comprehensive overview will be left sorely disappointed. Regurgitating facts has never been Kusturica’s style, especially in his documentaries on famous South Americans, which opt for impressionistic portraits rather than photographic detail. When he made a film about the footballer Diego Maradona, he was obsessed with the ‘hand of God’ goal scored by the powerful Argentine against England at the World Cup in ‘86 and egregiously connected the foul play to the Falklands war.

El Pepe has a much sweeter sensibility. A fawning Kusturica is most enamoured by the love between El Pepe and his wise partner Lucia Topolansky. Kusturica even puts in a slightly cheesy, but highly emotional montage of photographs of the former president and current vice-president of Uruguay showing them through the ages from young lovers to today. In his domestic life there is evidence of the modesty for which El Pepe was famed and celebrated: let’s not forget that the Uruguayan found fame around the world for turning down the luxuries of the Presidential palace and chauffer driven cars to live in his own home and drive his VW Beatle. In the garden on his farm he delivers the same philosophies and manner he does on the political stage. Kusturica shows El Pepe delivering speeches in Costa Rica, Mexico and the United States in his role as statesman.

When biographical details are included, for the most part they arrive organically. Only when Mujica mentions his years spent in jail during the Uruguayan dictatorship, a story told in more detail by Alvaro Brechner in A Twelve-Year Night [+see also:
film review
trailer
interview: Álvaro Brechner
film profile] playing in the Orizzonti section of Venice, does Kusturica impose a historical perspective, but even this is abstract. He mixes in footage from Costa Gavras’s 1972 political drama State of Siege as representing the era. But for the most part, Kusturica is happy to sit back, smoke a cigar and let Mujica have his moment.

The film was produced by K&S Films (Argentina), Rasta International (Serbia) and Moe (Uruguay), and is sold internationally by Film Factory. 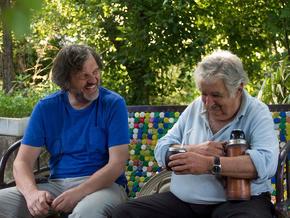 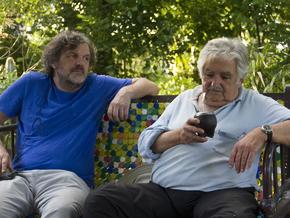