10/09/2018 - VENICE 2018: In the closing film of the Venice Film Festival, Nick Hamm keeps things light, ultimately leaving you hungry for something more substantial

In Driven [+see also:
trailer
interview: Nick Hamm
film profile], his glossy biopic of John DeLorean, the infamous automobile tycoon forever immortalised by Back to the Future’s DeLorean-based time machine and accused of smuggling cocaine in order to – and this is a true story – save his fledgling business, Nick Hamm does what everyone else would probably do in his place: borrow from Scorsese. The movie has been entrusted to bring the Venice Film Festival to a close, out of competition.

Although the story, penned by Colin Bateman, must have seemed like yet another ambitious take on the “great American drama”, thanks to Hamm’s inexplicable fondness for slow-motion shots and moustaches, not to mention an all-too-familiar structure, it ends up as a laughable, if relatively easy, watch.

No stranger to unexpected bromance, thanks to his 2016 drama The Journey [+see also:
film review
trailer
film profile], which saw arch-enemy politicians Ian Paisley and Martin McGuinness finally put their differences aside after sharing a ride to the airport, this time around, Hamm shows DeLorean (Lee Pace, stuck sporting the most ridiculous wig this side of Westeros) befriending an ex-con turned FBI informant, Jim Hoffman (Jason Sudeikis). But with no real chemistry to speak of, possibly because of that wig, the stakes don’t really seem all that high, nor the betrayal that painful. Ultimately, it’s just two crooks clad in polyester trying to outsmart each other, and no amount of desperate cries of “but he is your friend!” emanating from Judy Greer, once again cast as a long-suffering wife, will make you care if they do. That being said, it would surely make for a perfect entry in the Coen brothers’ informal “idiot trilogy”. Let’s make it happen.

With the story set in 1980s California, all opulent parties and outrageous fashions, Hamm is clearly having some fun with the period details, and the cast, caked in fake tans like there’s no tomorrow, is certainly game. Unfortunately, the whole thing is quickly let down by the supposedly funny one-liners delivered by kids (never a good idea) and some, how should we put it, excessive car touching. In the end, Driven could be seen as a cinematic equivalent of that famous John Travolta strut at the beginning of Saturday Night Fever: dynamic, occasionally entertaining and slightly self-satisfied, but frankly all over the place. 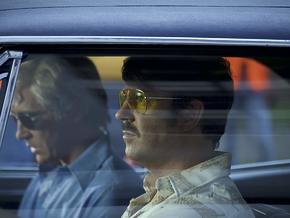 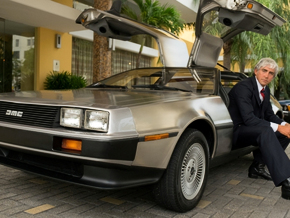