11/09/2018 - VENICE 2018: In his third feature this year, Sergei Loznitsa returns to working with archive material, utilising it as an indirect commentary on political prisoners in Russia

Certainly one of the most prolific filmmakers in recent years, Belarus-born Sergei Loznitsa has presented his third feature film in less than a year at the 75th Venice Film Festival, out of competition. With the documentary The Trial [+see also:
trailer
film profile], he returns to working with archive material, as previously seen in films like The Event [+see also:
film review
trailer
film profile] or the harrowing Blockade. The likeness of the film’s English title to the name of the novel by Franz Kafka is probably not completely coincidental: as in the Bohemian author’s fictional masterpiece, the Stalin-era show trial that the documentary depicts is absurd and surreal in its extreme measures to legitimise the Soviet government of the time.

Loznitsa discovered the footage of the trial of a group of high-ranking economists and engineers in the 1930s Soviet Union while attempting to make a somewhat different film, a collage of footage from several different court proceedings in order to show how the Soviet terror machine was established. The unique footage he found, a propaganda film, featured original sound, a rare treat at the time, and the spectacle intended by Stalin’s government as a demonstration of the power of his totalitarian regime was reconstructed step by step. The accused economists and engineers are charged with forming a secret pact with French Prime Minister Raymond Poincaré and other Western leaders in order to restore capitalism and fracture the USSR – and in a ridiculous sequence of court proceedings, they confess to all of the fabricated crimes and diligently testify against themselves, one after another. The Trial is a film with a specific course that is clear from the introductory scenes, but rewards an attentive viewer with striking details nonetheless.

In terms of its involvement with the matter at hand, The Trial certainly falls in line with Loznitsa’s recent films in general, which convey no trace of the warmth, fondness or humour found in his early films, like Portrait, The Train Stop and Northern Light. The subjects he has recently dealt with in his films from Maidan [+see also:
trailer
film profile] to Austerlitz [+see also:
film review
trailer
film profile] and the fiction Donbass [+see also:
film review
trailer
interview: Sergei Loznitsa
film profile] are increasingly distasteful in terms of their politics, and are tangibly filmed as such by the director, who has been more and more vocal about his criticism of Russian politics and aggression in Ukraine in recent years. The timing of the film is probably no coincidence either: throughout the entire running time, it is impossible to overlook the intended meaning of Loznitsa’s movie at a time when several Ukrainian political prisoners are facing similarly unfair treatment in modern-day Russia. Filmmaker Oleg Sentsov was detained in Crimea and sentenced to 20 years in a Russian prison on similarly fabricated charges of terrorism together with many others, and Loznitsa has spoken on many occasions about his imprisonment and actions to free him. Still, The Trial is an absorbing and wonderfully complex film in its own right – albeit one that warns of the consequences of total authority, now, then and in the future.

The Trial is a Dutch production staged by Atoms & Void and Wild at Art.

more about: The Trial

VENICE 2018: In his third feature this year, Sergei Loznitsa returns to working with archive material, utilising it as an indirect commentary on political prisoners in Russia 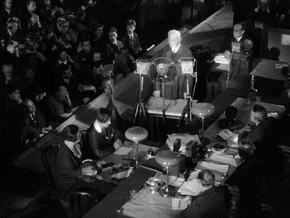