Twenty minutes have been cut from Outlaw King [+see also:
trailer
film profile] since its premiere as the opening-night movie at the Toronto International Film Festival. It’s now appearing in a leaner, meaner and altogether more watchable guise as a Gala screening at the London Film Festival. Scottish director David MacKenzie went on record as saying that he felt the audience’s apathy during the Toronto screening, and so he went back into the editing room, and this new, definitive version, which will be screened on Netflix, is a vast improvement, especially in the first act, where the axe has come down hardest.

There are, however, some things that cannot be rectified, one of which is MacKenzie’s decision to stay loyal to the cast of his previous film, the Cannes breakout hit Hell or High Water, which means miscasting Chris Pine as Robert the Bruce. The backhanded compliment to his Scottish accent is that it’s better than Christopher Lambert’s attempts in the Highlander films.

Outlaw King is set 700 years in the past and details the story of how Bruce went from being an aristocratic lord who surrendered to England’s King Edward (Billie Howle) to an outlaw who wants to rebel against the crown. The new edit helps Pine in that it cuts straight to the delivery of dialogue, and a lot of his languid, pensive looks have been removed. In omitting peripheral characters, it also brings out the performance of Florence Pugh as Elizabeth de Burgh, betrothed to Robert the Bruce after his first wife died giving birth to their daughter. Pugh depicts de Burgh as the woman behind the man, dishing out unsolicited political advice, raising his child and proving a vixen in his bed. Pine’s Hell or High Water co-star Aaron Taylor-Johnson sports another big beard as he appears as the trusted and brave soldier James Douglas.

But it’s a very uneven film. The editing of the first act is aimed at setting up the world and the conflicts in as expedient a manner as possible, until it slows down for the grandstanding battles. The trouble is that the battle scenes pale in comparison to the classic Scottish haggis-and-kilt blockbuster, Braveheart, in which Mel Gibson shone in his tartan as William Wallace. The action scenes get stuck in the mud, never quite delivering the requisite tension or action.

This has been a passion project for Scottish director MacKenzie, but this film was always going to struggle from the moment that Pine was given the lead role. MacKenzie may have been wiser to cast Taylor-Johnson as the leader of the pack and Pine as his sidekick. 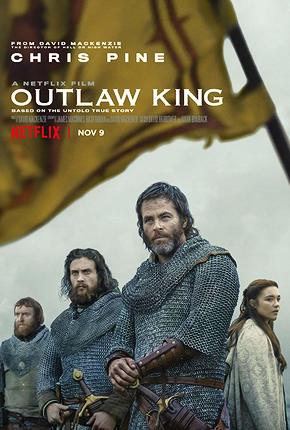