Review: They Shall Not Grow Old

09/11/2018 - In his new film, Peter Jackson breathes extraordinary life into archive footage of World War I soldiers on the Western Front

To coincide with the centenary of the end of World War I, Lord of the Rings director Peter Jackson has taken war footage housed at London’s Imperial War Museum, mixed it with interviews conducted with serviceman by the BBC and said museum, and made They Shall Not Grow Old [+see also:
trailer
film profile], one of the greatest documentaries about World War I. It’s that rare cinematic beast: an instant classic. The movie comes out today in UK cinemas.

It starts with black-and-white footage from the Western Front. This material is displayed in a small square box image in the centre of the screen. It’s been cleaned up and looks impressive enough, but also demonstrates the problems with the footage: the men walk jerkily, and the framing and camera work are limited. Then comes the pièce de résistance: the image blows up, filling the whole of the cinema screen, and the black-and-white footage transforms into colour. The men cease to be dainty figures of the past and instead become vibrant, real and startling personalities. Even more shocking is how the treatment of the image makes the trenches seem so inhospitable, the reality of the front imbued with vivid and shocking detail: rats, floods and dead men impaled on barbed wire. The colourisation process still gives the impression of a bygone age, but it also brings World War I to the present, in a way that not only demonstrates the power of the audiovisual image, but also offers a challenge to filmmakers around the world to put to good use this technique developed by Jackson and his production team to treat ancient archive material.

Most of the cameras shooting footage during World War I were primitive, with speeds ranging from 10 to 16 frames per second. The film stock has deteriorated badly. Jackson has taken 100 hours of footage and mixed it with 600 hours of audio, matching the movement of the soldiers’ lips with the sound. Jackson has converted the footage so that it plays at 24 frames per second, and we finally see the men at a speed we recognise as realistic. Some of it has also been converted to 3D. The voiceover provides an insight into the mindset of the men, from signing up, through training, to the realities of life on the front line, and then the brutality of returning home. Jackson has used letters and diaries to give the narrative a reality and a present tense. These are human stories.

In 1916, the documentary The Battle of the Somme, much of which we now know to have been faked, shocked British audiences. They Shall Not Grow Old generates a similar sense of shock and awe, even if the narrative is limited to the Western Front and so much of the heroism seen in World War I from soldiers around the world is omitted. While this is a limitation that brings into question the way that history is often retold and whitewashed, this should not detract too much from the remarkable technical achievement of this stirring work.

They Shall Not Grow Old was co-commissioned by 14-18 NOW and Imperial War Museums in association with the BBC. It was produced by New Zealand’s WingNut Films and was executive-produced by the UK’s House Productions. It is being released in British theatres by Warner Bros Entertainment, which also owns the worldwide rights.

more about: They Shall Not Grow Old

In his group therapy session of a movie, Carl Javér finally lets the survivors of the Utøya rampage talk

Review: They Shall Not Grow Old

In his new film, Peter Jackson breathes extraordinary life into archive footage of World War I soldiers on the Western Front 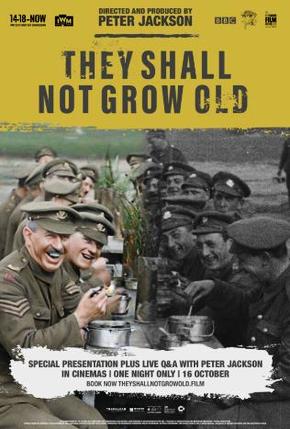 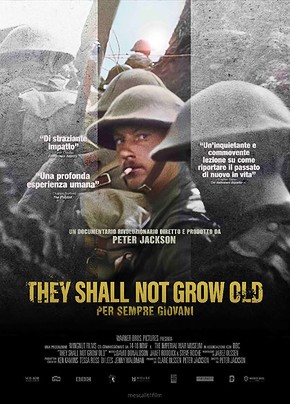