Review: An Army of Lovers

“We’re not nice, we’re mad and gay, now take that illness clause away.” You can almost smell the zeitgeist. Images in grainy, high-contrast black and white or in sun-drenched 16-millimetre colour stock depict playful, optimistic young people – activists, as it were – ready to aim for the stars and sometimes succeeding. Sonja, Håkan, Marie, Olle, Annalena, Gunnar and their friends all possessed, as they preferred to put it, “the ability to love someone of the same gender”, and wanted the world to know about it. They were neither sick nor crazy, despite that wrongful clinical definition labelling homosexuality as a “mental disorder”.

In An Army of Lovers [+see also:
trailer
film profile], a vivid account of the 1970s gay rights movement in Sweden, now screening in the Documentary Competition of the Stockholm International Film Festival, director Ingrid Ryberg revisits the era with the sterling aid of a group of participants who chose the language of cinema to present their lifestyles. Increasingly incensed with the stereotypical on-screen portrayals of wacky and/or suicidal homosexuals, they decided to shoot their own version. Three independent, collectively directed films, Damned Queers, Eva & Maria and The Woman in Your Life Is You, were all made in 1977. Two of them were funded though the Swedish National Board of Health and Welfare, the very office to have made the “illness” diagnosis in the first place. These were indeed paradoxical times.

It’s a beautiful and fascinating piece of history, and is recent enough to have most of the main players still around. Ryberg reunites them and has them reminiscing, which they do with gusto. Several lived together in radical communes, and even had schedules on the refrigerator on who would sleep with whom that night. “Aah, one had some pretty great skills in those days,” muses Håkan. It was all about breaking down the old and building up the new.

“We were happy, young, in love and had fun,” is Marie’s recollection, both of the time itself and of the memories of shooting Eva & Maria. This tender and life-affirming love story between two young women was made to show in schools. Not everyone liked it, however. “One of the school nurses we screened it to stood up and said: ‘I’ll never show this to my pupils – your characters are simply far too happy!’” The film did get shown, though, also internationally, as did Damned Queers, which won several awards at the Oberhausen Short Film Festival in 1978. After a couple of decades in oblivion, these films are now being seen again, by an appreciative new generation.

Ryberg has also unearthed some unique archive footage, not least from the demonstrations in 1977 on the first “Liberation Day”, the embryo of Stockholm Pride. It is here where chants like the one above were heard and were also actually having an effect: in 1979, Sweden became the first country in the world to remove homosexuality as an “illness”. Just around the corner, HIV would cause a great deal of damage, and still today, homophobia is very present in many places. Our radical heroes worry, but they also look both back and forward with positivity. Håkan, ready to hit the streets for yet another Pride parade, says: “The bliss I’ve experienced is immense. I never got fired upon or fired from work; I have peacefully and openly been able to cultivate my love for my partner, and we now have the same rights as all the ‘heterophiles’. But nothing is ever to be taken for granted. Had I been young today, I’d hit the barricades again.”

An Army of Lovers was produced by HER Films, and the sales agent is yet to be announced.

more about: An Army of Lovers

Review: An Army of Lovers 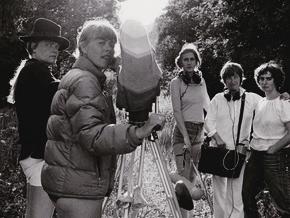