The second Spanish film (after The Hidden City [+see also:
film review
trailer
interview: Víctor Moreno
film profile]) to be screened in official competition at the 15th European Film Festival in Seville is also a documentary, but diametrically opposed to the first: Idrissa, Chronicle of an Ordinary Death [+see also:
trailer
film profile], directed by Xavier Artigas and Xapo Ortega, to whom we already owe a documentary that caused some trouble a few years ago: Ciutat morta, winner of the Silver Biznaga for Best Documentary at Malaga Film Festival in 2014. As many readers will recall, this denunciatory film challenged court decisions and controversial facts in Barcelona. This new film, now screening at the Andalusian event, has very similar intentions, albeit with different results.

This time, Artigas et Ortega have chosen to focus their camera (with the collaboration of screenwriter Laia Manresa – Más allá del espejo) on the theme of immigration (which they previously tackled in Tarajal: Desmontando la impunidad de la frontera sur in 2016) and how people who come to Spain seeking a new and better life are treated once they arrive. They focus on the case of Idrissa Diallo, a 21-year-old Guinean who died while in state custody in an internment centre for foreign nationals in Barcelona.

From there, the filmmakers investigate evidence that might arouse some suspicion that this was a racist crime or a case of neglect by the administration. They get involved in his repatriation (through a crowdfunding campaign) to his family, who heard nothing about the young man for years. The co-directors' camera accompanies the whole process, from the investigation (in a television reporting style) to the courts and then to Idrissa's funeral in Africa (in a second, more aesthetic part to the film, where the trip represents the narrative's backbone).

Idrissa, Chronicle of an Ordinary Death, shot between Barcelona and Guinea, is a film that aspires, according to its directors, to "dismantle lies and enlighten the facts," that is to say, to be more than just a classic film, to also act as a tribute and to help repair and restore the dignity of a man who was treated unfairly in a country that claims to defend human rights. "At his burial in his native village, it’s very evident that Idrissa mattered to a great number of people," concluded Artigas and Ortega at the screening of the film in Seville.

Idrissa, Chronicle of an Ordinary Death, a four-year documentary, was produced by Metromuster in co-production with Polar Star Films, with support from the ICAA, ICEC, MEDIA, Rosa Luxemburg Foundation and TV3, in collaboration with Tanquem els CIE, IRÍDIA and La Directa.

more about: Idrissa, Chronicle of an Ordinary Death 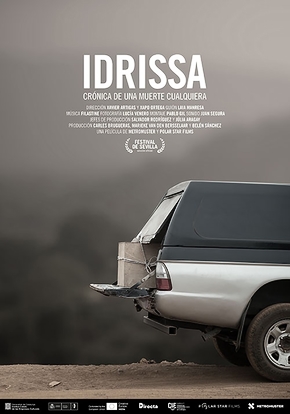