After its world premiere in IDFA's Competition for Feature-Length Documentary, Los Reyes [+see also:
trailer
film profile], by the Chilean filmmakers Bettina Perut and Iván Osnovikoff, picked up the Special Jury Award. This observational documentary about the titular, legendary skate park in Santiago, is told through the eyes – or rather ears – of two stray dogs who basically live there.

Football and Chola, the former an older crossbreed and the latter a younger, female Labrador, are in the film’s every shot. Whether playing or just lying in the shade – or in the two doghouses set up in the park when it rains – they are followed by Pablo Valdes' careful camera.

This is not just a film for animal lovers. Football and Chola are likeable dogs that we grow fond of over the course of the film, but Valdes films every little detail of their snouts, teeth, paws and tails – even when these are covered with flies. Certainly not a pretty sight, but one that does help viewers to relate to the film’s canine protagonists.

The sound of the film is, on the other hand, dedicated to human visitors to the park, mostly young skaters who we hear talking about smoking weed, making edibles, selling drugs, family problems, trouble they sometimes run into with the police… but mostly weed. In these instances, we sometimes see detail shots of their hands playing with lighters, or feet… only in one shot do we see one of their faces, reflected in a puddle after a night of heavy rain.

The film includes no music, but the sound design by Janis Grossmann and Roberto Espinoza – which must have been more than painstaking to create – provides many additional details to the narrative, and especially the atmosphere, which is not built over the proceedings with digital sound effects, but is instead created by natural noises that we would expect to hear in such a location. Los Reyes is definitely a real place on our planet.

The universe of Los Reyes skate park is thus presented in all its richness. The fact that it is shown from the perspective of two dogs is perfectly supplemented by the audio approach – after all, it is a fact that hearing is much more developed in dogs than sight.

There are moments of humour as well, and they stem from the viewers' experience of dogs. Football always has something in his mouth, whether it's a ball, a plastic bottle, a twig or a crumpled soda can. Chola has her favourite tennis ball that she is always chasing, and there is some wonderful interplay between the two dogs as they push the ball off the edge of one of the skating ramps and watch as it rolls down to end up somewhere between skateboard wheels.

Los Reyes is an unorthodox observational documentary that requires the viewer to settle into its laid-back rhythm. It asks you to stay with the dogs, and when you agree to it, the snippets of human conversation that reach you have a much stronger impact and their dynamic becomes more intense than if you were just watching youngsters talk about their escapades.

Los Reyes is a co-production between Chile's Perut + Osnovikoff Ltd and Germany's Dirk Manthey Productions. CAT&Docs from Paris has the international rights. 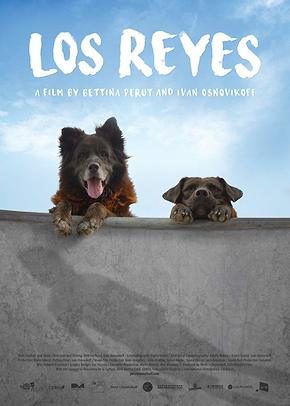