Review: ‘Now something is slowly changing’

Made up of leadership training with horses, aggressive role playing for law enforcers and whispering vloggers on YouTube, to name a few, ‘Now something is slowly changing’ [+see also:
trailer
film profile] is a beautifully crafted hotchpotch of coaching, training and therapy sessions. In her formally objective documentary, Menna Laura Meijer shows a disconcerting cross-section of Dutch society and its ever-so-evident quest for guidance and meaning in life. ‘Now something is slowly changing’ world-premiered at the 31st International Documentary Film Festival Amsterdam (IDFA), where it eventually surfaced as Best Dutch Documentary (see the news).

Throughout the film, we jump between seemingly unconnected scenes, in which we observe different people interacting with their trainers and coaches. No matter how absurd some of them may be, at some points it becomes clear that there is indeed a connection: everyone is searching for guidance on how to interact with others. This is a subtle but important component of the film’s message. “There’s a lot of pressure, with so many people watching,” a young boy says to his teacher as he climbs a tree, pointing out the camera’s presence. This refers, in a sense, to the way people tiptoe about in everyday life, feeling the gaze of others turned on them. This summarises the core of this therapy culture in a highly individualistic society, in which people are judged on individual performance, rather than collective progress. With symptoms such as a decreasing number of churches, this trend perfectly characterises contemporary Western society, and it leaves a void that people are trying to fill. During a seminar on coaching, where the speaker is reflecting on this trend, the Dutch trading spirit comes to the fore. “The expectations are that by 2030, there will be over seven million chronically sick people in the Netherlands. On one hand, that’s bad news, but for those who want to go into coaching… People are looking for a paid friend,” referring to people’s inability to confess in church.

Part of the film’s strength lies in its formal objectivity. The static cinematography, with the camera always maintaining a safe distance, is based on single shots looking at the subjects from the sidelines. We get the impression that they are not aware of our presence or the fact that we feel involved in the sessions themselves. This voyeuristic position that the viewer is placed in creates a distance between us and them, making it easy for us to laugh at the absurdity and experience vicarious shame. There is, however, an undercurrent of uneasy familiarity that slowly surfaces as the film progresses, allowing us to realise that we’re not looking at an exotic and unknown culture, but rather at our neighbours, parents and, yes… even ourselves. The documentary ends with the final words: “Try and feel inside, yes, now something is slowly changing," leaving us to ponder where we fit in ourselves.

‘Now something is slowly changing’ was produced by JeanMarc van Sambeek, Rosa Duvekot and Max Diezenberg for Amsterdam-based mint film office, in co-production with Dutch broadcaster KRO-NCRV. The world sales are handled by Some Shorts, and the Dutch distribution is managed by Cinema Delicatessen.

more about: 'Now something is slowly changing'

Review: ‘Now something is slowly changing’ 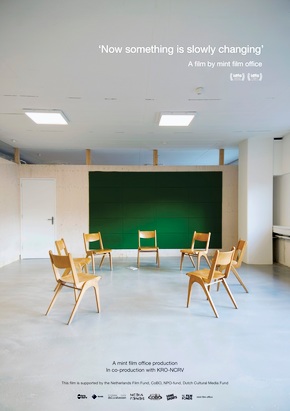 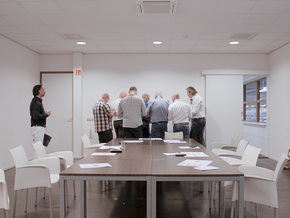