07/12/2018 - Rolando Ravello’s film opts for a comedic approach to cultural mixing and the mutual prejudices that go along with it, but ultimately lacks the necessary force to rattle many preconceptions

The road to multiculturalism is a tricky one, paved with mutual prejudice and holding a certain comedic potential: at least according to La prima pietra [+see also:
trailer
film profile], the new comedy from actor-turned-director Rolando Ravello, produced by Warner Bros. Entertainment Italia and Fandango. The film is based on a play by one of today’s most accomplished writers, Stefano Massini (who wrote both the story and the script), which in turn draws on an opera by the wonderful Canadian writer Robert Lepage.

A primary school is busily preparing its Christmas show when the peace is suddenly shattered. Little Samir (Lorenzo Ciamei), desperate to be outside in the playground with the others, throws a stone at a window in a seemingly meaningless act of rebellion, injuring the caretaker Marcello (Valerio Aprea) and his wife Loretta (Iaia Forte), who look after the building. The little boy’s Muslim mother (Kasia Smutniak) is immediately summoned, arriving with her obdurate mother-in-law, Fatima (Serra Yilmaz). Neither of the two has any intention of paying for the damage, and when it emerges that Samir has been assigned the role of an ox in the Christmas play, hostility breaks out in the office of the headteacher (played by a manic and very funny Corrado Guzzanti), who makes a well-meaning but hypocritical attempt to calm down the class teacher (Lucia Mascino), a bohemian vegan-type who believes in the power of karma. Despite all the fuss, the headteacher’s plan, appropriately enough, had been to turn the traditional and typically religious Christmas play into a delightfully interfaith performance: “But it begins with a Muslim legend and ends with Hindu poems!” he protests, as an increasingly oppressive situation starts to feel a little like Carnage [+see also:
trailer
film profile] (even if Roman Polanskiis on a very different plane to this breezy comedy).

La prima pietra (literally “the first stone”) makes a timely arrival to Italian screens just four weeks after the outcry caused by the headteacher of a school in Terni, who cancelled a Christmas production on the grounds that it might offend the sensibilities of children not of the Catholic faith. Naturally, the episode also prompted the immediate involvement of Deputy Prime Minister Matteo Salvini: “Christmas is approaching, and, once again, here we have these ‘headteachers’ who want to stop children from putting on plays. This isn’t just about religion; it’s also about history, roots and culture. Here’s to our traditions; I’ll stand by them all!”

So, the reality here being more comedic than comedy, and given the current sovereigntist climate, it is unfortunate that La prima pietra is unable to muster sufficient impact to poke holes in these prejudices with humour alone. We see no traces here of the devilry of classic Italian comedy, and the endless stream of clichés leave us with an impression of political apathy. La prima pietra is set to arrive in Italian cinemas on 6 December, distributed by Warner Bros. Pictures.

Rolando Ravello’s film opts for a comedic approach to cultural mixing and the mutual prejudices that go along with it, but ultimately lacks the necessary force to rattle many preconceptions

Among the titles presented on 6 December will be the new films by Gabriele Mainetti and Sergio Rubini. Also on the menu are 19 co-production market projects 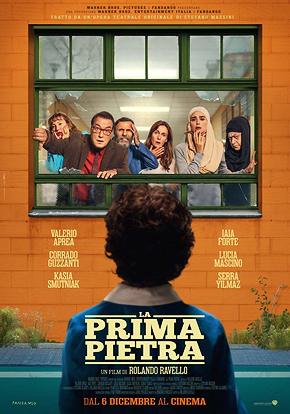 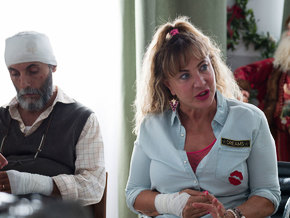