Riku Nieminen (right) in The Ragged Life of Juice Leskinen

Already eyeing a local Christmas release, Teppo Airaksinen’s melancholic, morbidly funny The Ragged Life of Juice Leskinen [+see also:
trailer
film profile] is not quite what it seems. Although focusing on the acclaimed titular musician and writer, who passed away in 2006, there are no moments of well-deserved glory or a familiar set-up framed around some crucial event with the protagonist given just enough time to ponder the past – preferably in chronological order, so that nobody gets too confused. In short, somehow it manages to avoid almost all of the clichés so lovingly spoofed in the John C Reilly-starring Walk Hard: The Dewey Cox Story. And where Dewey Cox needed to “think about his entire life before he played”, Juice Leskinen – well – simply couldn’t be bothered.

Having experienced a childhood marked by loss, and punctuated by funerals and – at least in the film – the regular consumption of what seems to be the exact same soup, as the Finnish director already told Cineuropa (see the news), the “Bob Dylan of Finland” was known for more than just his songs. “We always talk about these ‘tears of a clown’. And that’s what he was – he was the first Finnish stand-up comedian,” observed Airaksinen. Which, as it turns out, serves the movie quite well. Played to obnoxious perfection by Riku Nieminen, Juice entertains out of pure necessity: cracking jokes even when bound to a hospital bed, with his erotically charged, frequently hilarious lyrics hiding his vocal weakness and a lack of technique. It’s no wonder the script, based on the biography by Antti Heikkinen and written with real flair by Headfirst [+see also:
trailer
film profile]’s Antti Heikki Pesonen, positively crackles with witty one-liners, as delicious as they are (mostly) unprintable. Including, among others, a rather unique take on the left-wing anthem “The Internationale”: “It’s the sexiest song – all pricks pop up when it plays.”

Although there is no escaping the occasional flashback, the odd wig here and there, and a truly astounding number of close-ups of food being boiled, fried or stirred, it’s incredibly impressive how subtle this film really is. Concentrating on a relatively short period of time and by no means a slave to the facts, it actually allows itself to be completely unassuming – with crucial events often playing off screen, reflected only on a petrified child’s face, which still fills in the gaps better than any award-friendly antics would.

Beautifully shot on film by Aarne Tapola, who was also behind Airaksinen’s acclaimed short The Ceiling, it sees the aspiring musicians of Coitus Int. – yes, that’s their real name – play not at stadiums, but in a tiny apartment in between patting a cat, and when they finally hear their first song on the radio, the world doesn’t quite stop spinning. That said, with a protagonist who promptly removes his dentures at the slightest opportunity, including on a first date, and who comes up with the breakthrough 1974 hit “Marilyn” on the toilet, such a complete lack of pretension shouldn’t really come as a surprise. “I used to be able to carry a bucket of water with my hard-on, but now my knees are giving up,” Nieminen’s Juice casually observes at one point, perfectly capturing this whole endeavour. It may make you laugh, but you will also feel the pain.

The Ragged Life of Juice Leskinen was produced by Marko Talli, of Yellow Film & TV. It was made with the support of the Finnish Film Foundation, and it is being distributed by SF Studios Oy.

more about: The Ragged Life of Juice Leskinen

Thanks to crowd-pleasers Happier Times, Grump and Land of Hope, in 2018 domestic films notched up 1.9 million out of the overall 8.1 million admissions

Ragged Life of Juice Leskinen, directed by Teppo Airaksinen, will focus on one of the most prominent Finnish singer-songwriters in history, who passed away in 2006 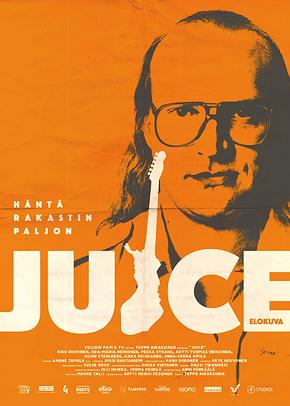