10/01/2019 - In his sixth feature, Massimiliano Bruno experiments with time travel, genres and the Banda della Magliana criminal gang in a nostalgic nod to the 1980s

Two months after the theatrical release of Magical Nights [+see also:
film review
trailer
film profile], the Football World Cup is back on Italian screens. While Virzì's film revolved around the 1990 World Cup, Massimiliano Bruno's new comedy, Non ci resta che il crimine [+see also:
trailer
film profile], jumps further back in time, to the glorious World Cup of 1982, which saw Italy triumph in Spain. A journey into the past for the film’s three modern-day protagonists, who find themselves catapulted to Rome 36 years earlier, with the extraordinary ability to guess the outcome of every single football match with a 100% success rate.

Our trio of somewhat dorky fifty-year-olds becomes obsessed with “making tons of money," before coming up with an illegal tour about the Banda della Magliana criminal gang in order to get by. Leather jackets and bell-bottom jeans, Moreno, Sebastiano and Giuseppe (Marco Giallini, Alessandro Gassmann and Gianmarco Tognazzi respectively) are more or less convincing as 1970s tour guides, until, following a reunion with an old classmate who was bullied at school and is now a successful manager (played by Bruno himself), they find themselves – in a rather vague and approximate way as to the how and why – walking through a space-time tunnel that projects them into 1982, and right into the Banda della Magliana's lair.

But what to do? Go back to the future or make the most of their thirty-year advantage on everyone else? Thanks to the encyclopaedic memory of Giuseppe, who remembers the score of every single World Cup match, the trio starts to place clandestine bets, winning a lot of money. However, sooner or later they find themselves having to deal with the gang's suspicious boss, Renatino (a very evil Edoardo Leo) and the enchantments of his mistress (Ilenia Pastorelli, whose nude scenes are perhaps a little too ostentatious). And this isn’t the only path the three friends end up travelling in order to reach their desired "turning point," resulting in a film – between its nostalgic references, past icons and nods to films such as Nothing Left to Do but Cry, Back to the Future and Romanzo Criminale [+see also:
film review
trailer
interview: Michele Placido
film profile] – that is somewhat confused and haphazard, despite there being a few good gags along the way. In a feature that sees the fantasy genre meets the detective one, the fun never really takes off.

Mixing genres and travelling back to the '80s seems to be the current magic potion of Nicola Guaglianone, who wrote the film with Menotti, Andrea Bassi and the director himself. Guaglianone is also the architect behind another successful film currently in theatres, The Legend of the Christmas Witch [+see also:
film review
trailer
film profile] (€7 million in box office takings to date), which plays on the theme of the 1980s teen movie. Non ci resta che il crimine is undoubtedly a pop film that won't fail to attract its fair share of admirers, but we expected something a bit more explosive from the combination of time travel and the Banda della Magliana criminal gang, beyond the film's entertaining costumes. 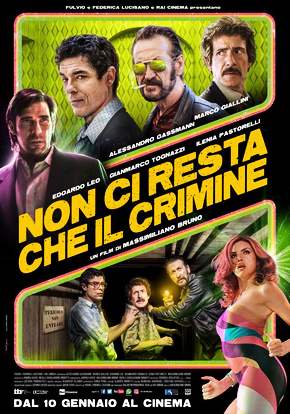 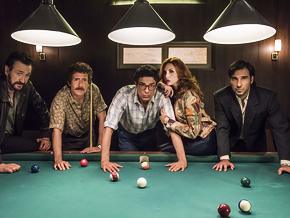 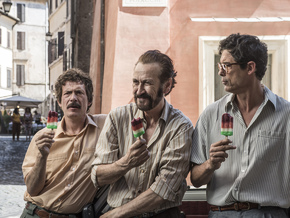 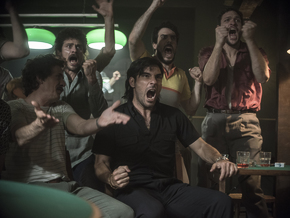