11/01/2019 - Riccardo Donna's biopic of Mia Martini mixes fact and fiction to tell the story of a liberated woman and her incredible singing voice. Nexo is distributing the film in Italy on 14, 15 and 16 January

It was Charles Aznavour who noticed her extraordinary talent and requested she perform alongside him in a triumphant recital at the Olympia in Paris – the holy grail of French music venues – where she was compared to Edith Piaf. Despite being adored by the public and critics alike, the music industry had a certain disdain for Mia Martini, failing to forgive her insistent pursuit of success and ultimately opting to destroy her life via gossip, exclusion and prejudice. The Eliseo Fiction and RAI Fiction film attempts to redeem the larger-than-life singer and to educate younger audiences on her one-of-a-kind singing voice. 300 copies of Riccardo Donna’s Io sono Mia will be distributed by Nexo Digital in Italian cinemas for three days only, on 14, 15 and 16 January. The film will also be broadcast on RAI1 in February and online via RAIPlay. Io sono Mia picks up a journey that RAI Fiction started last year with Principe Libero about Fabrizio De André, which wasalso distributed by Nexo before landing on RAI1's Prime Time.

In the role of Domenica Berté – also known by the name Mimì, and her stage name Mia Martini – is the formidable Serena Rossi, a singer and actress who recently demonstrated her talent in Love and Bullets [+see also:
film review
trailer
interview: Marco and Antonio Manetti
film profile]by theManetti Bros. – bringing Mia's songs to life as arranged and performed by Mattia Donna with La Femme Piége. As pointed out by Eleonora Andreatta, director of RAI Fiction, more than a hagiographic biopic, Io sono Mia is a tribute with a narrative (the screenplay was written by Monica Rametta) that hopes to capture the essence and uniqueness of the 1970s star. The plot mixes fact and fiction, staying fairly true to real-life events, despite many of the film's characters being fictional, such as a music agent that spreads a rumour that Mia Martini brings bad luck, or a certain photographer (Maurizio Lastrico), in a relationship with Mia for over a decade, a relationship full of misunderstandings and arguments, and one that perfectly encapsulates the singer's oft-tormented romances. But the most important character in the film is undoubtedly the journalist (Lucia Mascina), who interviewed Mia a few hours after her return to Sanremo in 1989 following years of silence, and with whom Mimì hashes out her life: her passion for girly music, her beginnings, her difficult relationship with her traditional father, discos and parties with her sister Loredana (Dajana Roncione), her manager Alba (Nina Torresi), meeting her future manager Alberigo Crocetta (Antonio Gerardi), her successes, her friendships with her songwriters and finally, her demise.

After releasing the song "Piccolo Uomo" in 1972, Mia is hailed the singer of the year by European critics. She records her hit songs in French, German and Spanish and her records come out all over the world. Mia refuses to let people interfere with her artistic and personal choices. She clashes with record companies and rips up contracts. But the record industry won't forgive her desire for freedom and she is slowly marginalised. The slander defeats her. "Why did you come back to this circus?" a journalist asks her many years later. A love for music and for life. With great attention to detail – stage designers Conte and Panconi and costume designer Enrica Barbano have perfectly reconstructed the period – and a direction that never fails to bore, the film brings to life the passions and emotions of a great singer, demonstrating an ability to create a multi-platform film that works well on both the big and small screen.

Riccardo Donna's biopic of Mia Martini mixes fact and fiction to tell the story of a liberated woman and her incredible singing voice. Nexo is distributing the film in Italy on 14, 15 and 16 January 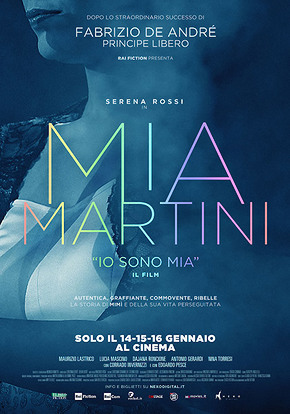 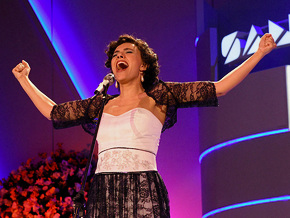