After we see the mist blur into the landscape in the extraordinary opening frames, we discover our leading man, who has chosen to live in a cabin by the water with his best friend – his dog, Tussi (for fans of dogs in movies, this is a must) – shooting fish, birds and animals for food. It’s a life of solitude, and we know nothing about him. But slowly, we learn that it’s not a complete rejection of modern life that he’s opted for: he has his gun, listens to the football and the weather reports on his radio, and has a mobile phone that he may often forget to switch on, but through which we will learn that he has become a grandfather again, and that his family are not estranged, but neither do they come to visit.

Larsen allows the audience to gather tidbits of information through watching the man going through the motions of his existence and hearing his ramblings. He seems to be talking to himself on several occasions, but that’s mainly because the beautiful cinematography almost makes us forget that Larsen has to be there filming and that the man, at least whilst the cameras are rolling, is not alone.

Larsen has previously worked with Victor Kossakovsky (Demonstration and Aquarela [+see also:
film review
trailer
interview: Victor Kossakovsky
film profile]), and he shares with the Russian director the desire to let images, rather than dialogue, push forward the viewer’s understanding of what is happening. Larsen has chosen to make this film in black and white, which also provides a link to filmmakers obsessed with psychology, such as Andrei Tarkovsky and Béla Tarr.

The helmer’s refusal to use music to elicit emotion and instead let nature provide much of the soundtrack is consistent with his rejection of cinematic tropes, even though it’s clear that this will ostracise some audiences. The Norwegian director enables us to understand the harshness of this existence and continually challenges us to question why someone would choose to live this way. Only during the end credits does Larsen give us a clue, informing us of Steinar’s previous job and life, and that somehow goes against the grain of many of Larsen’s aesthetic choices. Perhaps he felt he needed to do so, as despite the stylistic highs of Where Man Returns, it is at times too sombre and abstract to really hit home.

Where Man Returns was produced by Norway’s Yellow Log AS.

more about: Where Man Returns

Hans Petter Moland’s successful bestseller adaptation proved itself at the 35th edition of the Norwegian industry awards, held on Saturday at the Haugesund Film Festival 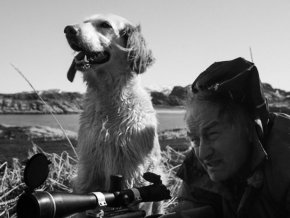