As far as romantic comedies go, nobody spelled out their rules better than comedian Mindy Kaling. “I like watching people fall in love on screen so much that I can suspend my disbelief in the contrived situations that occur only in the heightened world of romantic comedies,” she wrote. “I regard them as a subgenre of sci-fi, in which the world operates according to different rules.” But in Aurora [+see also:
trailer
interview: Miia Tervo
film profile], the opening film of the Göteborg Film Festival (25 January-4 February), director Miia Tervo, although surprisingly respectful of the genre’s most enjoyable clichés, surrounds her mismatched couple, bickering their way to love, with brutal observations on addiction and the refugee crisis, not to mention the unforgiving darkness of the Lapp winter. Julia Roberts would take one look at this world and run, only to get stuck in the ankle-deep snow.

But who needs Julia when you’ve got Mimosa Willamo, already the best thing in the breakout horror flick Lake Bodom [+see also:
trailer
film profile] and a proud Jussi winner for Headfirst [+see also:
trailer
film profile], here cast as troubled nail technician Aurora – introduced, as it happens, running away half-naked from a prospective (or ex) lover. Whatever his status, he is clearly not happy. But although the girl is bad news, and facing imminent eviction due to her permanent cash-flow issues, somehow it’s soon up to her to help Iranian dad Darian (a good performance by Amir Escandari) find a suitable Finnish wife in order to get asylum.

With a man considering marriage to avoid deportation, we are in similar territory to, say, The Proposal – although this time around, the stakes are much higher than a move to Canada. But Aurora doesn’t quite fit within the calculated polish of similar fare, which is both its strong suit and, to a certain extent, its downfall, as the plot wobbles drunkenly like its high-heeled protagonist. Brought down by shaky editing and supporting players, buried under heavy styling and seemingly hired only to overact, it comes down to Willamo to deliver the emotional punch, all the while looking like Donatella Versace kept outdoors for too long. Luckily, she delivers a perfectly timed blow, with her character’s sudden change of heart manifested in – to borrow the title of Tervo’s 2015 short film – clumsy little acts of tenderness.

While the protagonist’s drunken misdemeanours (“Having an occasional problem with drinking doesn’t mean having a drinking problem,” she insists with conviction) would make it extremely easy to write off Aurora as a Finnish answer to Trainwreck, it’s a much grimier proposition. Tervo interlaces every carefree moment (an attempt to get a twerking workout for free merits a special shout-out) with gasp-inducing lines of dialogue, even going as far as championing every woman’s right to – please forgive me – fart. While not all of the jokes land, and some crash to their deaths, her thorough lack of interest as far as political correctness is concerned is to be commended – especially within a genre generally regarded to be prim and proper. After all, it’s not every day that a meet-cute ends with a rape joke.

Aurora was produced by Max Malka, of Dionysos Films, and its international sales are overseen by LevelK.

“The way I see it, there aren’t many normal people around”

We met up with Finland’s Miia Tervo, the director of this year’s Göteborg opener, Aurora, a romantic comedy that’s not afraid to go dark

The Finnish director managed to wrap filming for his new effort in March, despite the COVID-19 outbreak

Cineuropa went to Helsinki to talk to Lasse Saarinen, the chief executive officer of the Finnish Film Foundation, which is celebrating its 50th anniversary this year

Norway’s HIM snags the Eurimages Lab Project Award at Haugesund 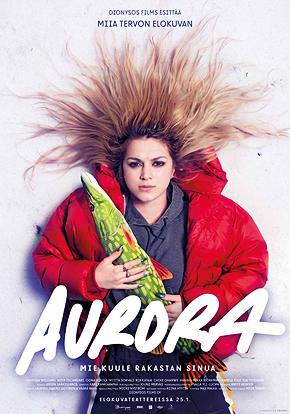