“Imagine… You’re in a dark, quiet room, alone… You hear your respiration. When I count to three, you will let go of all things outside. You are not afraid, not alone… You are loved… by me.”

Mia Engberg’s voiceover, whether in mellow-toned Swedish or endearingly accented French, is comfortingly familiar in Lucky One [+see also:
trailer
interview: Mia Engberg
film profile], which has just world-premiered at the Göteborg Film Festival, where it is competing for the Dragon Award for Best Nordic Film. Her voice was last heard six years ago in Belleville Baby [+see also:
trailer
film profile], a poetic account of a reunion between two former lovers, occurring entirely over the telephone or via diary readings, and visualised through footage shot on 8 and 16 mm, and a mobile-phone camera. “Baby” (named after a cat) travelled various festivals and picked up awards – often, somewhat curiously, for Best Documentary. This experimental mood piece shared its stylistic DNA with French “Left Bank” New Wave cinema, and names like Chris Marker and Marguerite Duras. The flexible label of “essay film” might have fitted it better, or – why not – Duras’ oft-preferred genre, the “autofiction”.

This time around, director-writer-narrator-protagonist Engberg presents her first fiction feature, again with a hint of a “perhaps”. Lucky One (named after a hamster!) reunites the couple, Swedish woman Mia and Frenchman Vincent, again over the phone. She’s preparing a story, and he, unable to escape his criminal life, works as a driver and stooge for a Paris gangster. She outlines her scenario (“Is the story about me?” he asks and is told, “Yes, maybe.”), and suggests that he helps her out. He is “allotted” two young female characters of similar age but finding themselves in vastly different circumstances: a teenage daughter to look after while the mother is abroad; and a freshly arrived, actually trafficked, Ukrainian woman, bound for the gangster’s stable of prostitutes. Assorted dilemmas soon emerge, including some deeply moral ones, as the phone-conversation story plays out in front of our eyes.

Engberg the Francophile lovingly explores the cultural and local environment with Engberg the Progressive Formalist close in tow. Her Paris is not so much that of the picture postcards as that of the ruggedness of Mathieu Kassovitz’s La haine or a moody 1950s French crime film. Daniel Takács’ dreamy images and Michel Wenzer’s delicate, jazzy score sensuously underscore the vibe, as does the fact that more or less the whole film takes place after sunset.

The stylistic choices also affect the framing: the camera closes in on a building from which dialogue is heard, but rather than cutting to the characters conversing, the setting remains on the outside façade. The actors get few long shots, a medium shot or two, and no close-ups. There are quite a few shots of empty rooms, of windows and of the sky. Sometimes, the screen is dark.

Engberg’s experimentalism is neither obscure nor demanding to sit through – quite the exact opposite, in fact. Gently guided by her affirmative voiceover, we, like Vincent, are soon captivated for the rest of the ride. Plus, it features Gabriel Fauré’s “Pie Jesu”, gloriously and literally illuminating the screen with impressionistic tones. In such sublime company, you are never alone – and indeed loved.

Lucky One was produced by Story AB (Sweden).

more about: Lucky One

“I want to make films that only I can make”

We chatted to Mia Engberg, who, through art and research, attempts to turn her old documentary subjects into fictional ones in her new film Lucky One

Review: The Average Color of the Universe 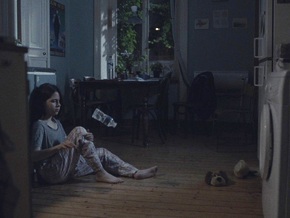 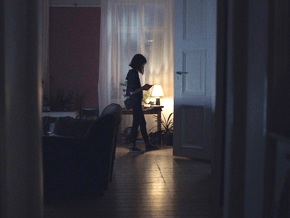