01/02/2019 - Director Victor Lindgren waves goodbye to the “Swedish Dream” in his new outing, which has world-premiered at Göteborg

Andreea Petre and Elin Marklund in The Unpromised Land

Taking place over the summer holidays and focusing on the unlikely friendship between local girl Elin (Elin Marklund) and Sabina (Andreea Petre), straight from Romania and struggling to find her place, Victor Lindgren’s The Unpromised Land [+see also:
trailer
film profile] is no The Children of Bullerbyn Village. World-premiering at the Göteborg Film Festival, in the Nordic Light section, The Unpromised Land is as pretty as can be, clearly shot by someone who knows what the Scandinavian summer is really all about. And yet, bathed in that beautiful northern light, it irritates like a rash, with the town it depicts remaining perfect only if you avoid screwing with its rules.

Sabina certainly does screw with the rules, although all she really has to do to annoy people is just exist. She is a little different, a little louder, with her black hair standing out in the sea of strawberry blondness like a smudge that should be removed. Having relocated from Romania to Holmsund, outside of Umeå, which looks exactly as it sounds and, interestingly enough, is also the director’s hometown, she wanders around aimlessly, yelling at the world in order to make herself seen, restless and bored while her older brothers try to make ends meet by working in a garage. She wants to work, too, but there are no takers, and the only person who looks at her instead of turning away is Elin, a girl her age and with her own struggles at home. And while it’s hard to say why, she is intrigued.

The main reason why The Unpromised Land works – although the hand-held camera really does get too much at one point – is that everyone here is slightly broken, recalling Lindgren’s acclaimed short Undress Me to a certain extent. Sabina may be as tough as nails after growing up in a family that was often starving, but Elin, although introduced singing angelically in church, is no freckled princess either, with thighs covered in self-inflicted bruises and a father she openly calls “crazy”. The way they communicate is hardly unhindered by obstacles either, with Sabina stubbornly insisting on speaking Romanian as if to show that even though she knows she is not wanted, she is not ashamed.

And wanted she most certainly is not. One almost wonders whether Lindgren is not exaggerating her situation somewhat – after all, why would she bother these people so much, so happy in their little Scandi paradise, this oasis of tolerance that everyone is so jealous of? But she does, with everyone anticipating the future problems that she and her “kind” might cause, kicking her out of the restaurant she has barely started working in or a shop she has just stepped foot in. Sabina is no saint, granted, but the treatment she gets is ice-cold, leading her to believe that if people keep accusing you of things, you might as well start doing them. It’s a film less about friendship than about some kind of camaraderie born of sheer desperation, but it’s one that still rings true. Because for all the hardships thrown at them left, right and centre, these are just two kids bonding over beer and nervously peeling off their chipped nail polish.

Written by Victor Lindgren, The Unpromised Land was produced by Therese Högberg, of Bautafilm. It was made in co-production with Film i Västerbotten, in collaboration with SVT and with support from the Swedish Film Institute. Its international sales are handled by Bautafilm, with Folkets Bio responsible for its distribution in Sweden.

more about: The Unpromised Land

Director Victor Lindgren waves goodbye to the “Swedish Dream” in his new outing, which has world-premiered at Göteborg 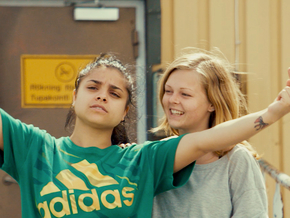