04/02/2019 - Armed with a smartphone and a selfie stick, in his directorial debut Martin de Vries invites us to tag along on his pilgrimage

Taking an average of 40,000 steps per day, director Martin de Vries takes us along with him on his pilgrimage to Santiago de Compostela in Camino, A Feature-length Selfie [+see also:
trailer
film profile]. The film, which was shot with his smartphone along the way, world-premiered at the International Film Festival Rotterdam (IFFR), in the Limelight section. Yes, I hear you thinking: 90 minutes of French and Spanish landscapes at walking pace must place a lot of pressure on the subject to hold the viewer’s interest. But de Vries does find a way to tell a story, allowing the film to transcend the realm of mere holiday footage to something more profound.

The story that de Vries discovers during his walk is basically a stripped-down account of the psychological transformation that people experience while undertaking such a physical, but surely also mental, challenge. The silence and the time spent alone simply empty your head of all volatile thoughts revolving around everyday life. He sets off without really knowing why he wants to do it, and while he leaves filled with sentiments of euphoria and pride, he slowly enters into a more serious encounter with himself and his ego. Blisters and broken toenails notwithstanding, he finds true enjoyment in the little things, like having a poo in the bushes. As he mentions himself, “The lows are lower, and the highs are higher,” and it takes time to adjust to this newfound rhythm. He presses on with this innocent, carefree spirit during the first half of the film, still lacking any real direction, but the question arises of whether we’re limited to seeing only the scenes where he has control over what occurs, like when he speaks directly to the camera. In other words, to what extent does he strip his representation down to a residual self-image, or selfie, fit for others to see?

The aesthetic of the smartphone footage – and, yes, even the vertical view, as opposed to landscape – suits the movie well in a way, as it underlines the authenticity you expect from such a film. Though it is achingly uncomfortable at times, it adds to the informal character of the whole. The entire point is about being alone, with thousands of thoughts that slowly spiral down to the ground, to be left there with every step. It is only this development, shifting from the excitement of something new to a more profound and clear vision of one’s own motivation, that elevates the film from being a mere visual diary. “Sixty days ago, I didn’t start with a specific question,” Martin admits, as he starts looking inward, rather than outward. He learns there is no chance of hiding when you are walking by yourself. This all leads up to an emotional climax, coinciding with dark clouds and rain, before he reaches his destination. He realises that the journey is not over, but that the rest has to be undertaken at home. And as if struck by a moment of clarity in the main square of Santiago, he decides he’d better not say anything at all. It’s as if the selfie, in which one’s ego generally plays a leading role, has finally lost its purpose and has turned into the mirror he realises he has been looking for all along. That is what eventually gives the pilgrim’s route the divine allure it is known for.

Camino, A Feature-length Selfie was produced by Janneke Doolaard for DOXY Films, based in Amsterdam, and by RealEyes Media.

more about: Camino, A Feature-length Selfie

Armed with a smartphone and a selfie stick, in his directorial debut Martin de Vries invites us to tag along on his pilgrimage 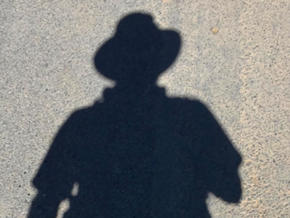 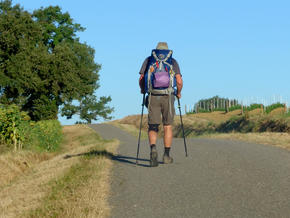 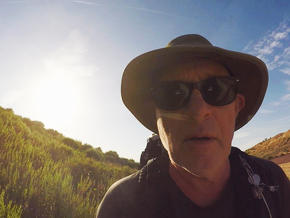 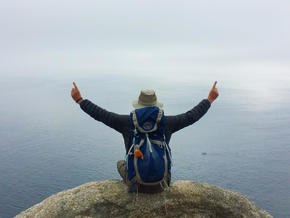