09/02/2019 - BERLIN 2019: In full rejection of the romanticism of criminality, Agostino Ferrente directs a documentary about a difficult Neapolitan neighbourhood, shot by its young protagonists on a smartphone

“I don’t like where I live, there are too many people and it’s dirty.” Alessandro, 15, works as a waiter in a bar. He lives in the Traiano District of Naples, where you can find any kind of drug you please. His best friend is Pietro, 16, who is currently out of work but would like to be a barber, a slender 119kg young man, with a welcoming smile. He's lost three cousins, all killed on the ring road. Both were friends with a 17-year-old boy, Davide, who was riding a moped one night and was killed by a policeman who mistook him for a fleeing fugitive. Alessandro and Pietro are the two protagonists of Agostino Ferrente’s Selfie [+see also:
trailer
film profile], which is due to be screened in the Panorama section at Berlin. As you may have guessed from the title, the director (who also directed the award-winning The Orchestra of Piazza Vittorio [+see also:
film review
trailer
film profile]) gave the boys two smartphones to tell their own story in video-selfie mode, before editing the material. It is interesting to note that also in official competition at this year's Berlinale is the Italian film Piranhas [+see also:
film review
trailer
interview: Roberto Saviano
film profile] byClaudio Giovannesi, adapted from a novel by Roberto Saviano, about six armed fifteen-year-olds and their attempt to conquer the Sanità District of Naples. A film that differs greatly from Selfie in terms of style andintent, but that also reveals a need felt by Italian directors to explore the territories of the Italian Gomorrah and to reflect on the next generation.

Reversing the current stereotype of the romanticised criminal underworld, Selfie includes an explicit moment in which the two protagonists discuss the spin to put on their story. Alessandro thinks they should focus on what’s beautiful about their neighbourhood, while Pietro doesn’t think they should spare viewers the ugliness. But they both dream of freeing themselves from the degradation of a society that is identified by its illegality. The two friends record flashes of their everyday lives. They wonder if going on a sun bed might give them more success with the ladies. They go swimming in Posillipo, "do you think we could ever have a house here?" they sigh. They go to visit their dead friend’s father. At the time, the media covered the case fairly superficially and many Neapolitans, weary of crime, uttered “well, that’s one less.” The director leaves the boys to present their own perspective on the serious event, and their world seems to rotate around the death. In a similar fashion, in his documentary in competition at Venice in 2018 What You Gonna Do When The World’s On Fire? [+see also:
film review
trailer
interview: Roberto Minervini
film profile], Roberto Minervini also tackled a series of brutal killings of young African Americans by the police in the USA. In various fragments, Checco, 19, says “drugs are easy money, but you either end up in jail or get killed by competitors.” While one of their friends loves weapons, and talks about Glocks, Caliber 38s, 9X21s and 375s, his “favourite.” Exercises in machismo conceal a certain fear. While on the other hand, young, made-up women send reassuring messages to their families (which are somewhat chilling for viewers to read): “I don’t like living here, but if my future husband were to go to prison for ten years, I would wait without betraying him.”

The fascinating thing about Selfie is not so much its use of a mobile device (Unsane by Steven Soderberghwas launched at the Berlinale in 2018 as “the first thriller filmed on an iPhone”) – to which Ferrente adds still images taken from video camera surveillance in a dry and quick style – it’s more that it represents an evolving film format, due to the innovation of language, which focuses more on technological poetics, where the body telling its own story represents a constitutive element of the dramaturgical text.

Produced by Magneto in co-production with Arte France and Italian outfits Casa delle Visioni and RAI Cinema, Selfie is sold by Deckert Distribution. 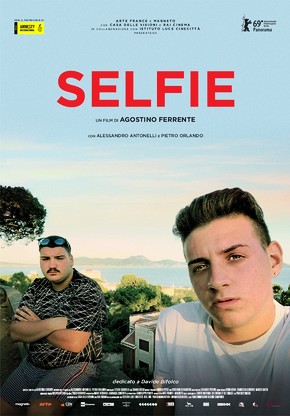 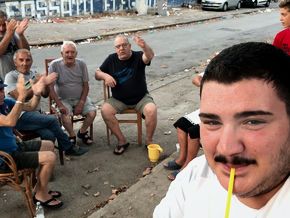