09/02/2019 - BERLIN 2019: Shot on three smartphones, filmmaker Hassan Fazili’s raw documentary records the journey that he and his family undertook to flee the Afghan Taliban

Arriving in the Panorama section of the Berlinale (7-17 February), following its debut in the World Cinema Documentary Competition at Sundance, the US-Qatari-UK-Canadian doc Midnight Traveler [+see also:
trailer
film profile] is a personal travelogue shot on three smartphones, which details the harrowing and lengthy (in terms of both time and distance) journey embarked upon by a filmmaking couple escaping the Taliban. In 2015, a bounty was put on the head of filmmaker Hassan Fazili after his documentary Peace in Afghanistan aired on television in Afghanistan. It profiled Taliban commander Mullah Tur Jan, who laid down his arms in favour of a peaceful civilian life. The commander was brutally murdered, and Fazili made the decision to flee with his wife, fellow filmmaker Fatima Hussaini, and their two daughters, Nargis and Zahra. Refused refugee protection rights, the family took the notorious Balkan route to Europe. As filmmakers, they decided to document this journey – one that would last for several years, with long stints spent in camps in Bulgaria and Serbia.

The tricky journey that refugees have to undertake to escape war and persecution has sadly become a necessary topic for documentaries to tackle in recent years. What separates this from Those Who Jump [+see also:
film review
trailer
film profile], a 2016 film that played at the Berlinale, is that this story has not been edited and filtered through European eyes. As an amateur filmmaker, the shot selection by Those Who Jump’s Abou Bakar Sidibé was unconscious and less geared towards a final movie as a product. In contrast, the filming of Midnight Traveler began with the idea of it being a documentary, and occasionally, the professionalism of the filmmakers means that the journey loses some of its rawness because the couple find their position as artists at odds with their status as refugees. The footage is edited and cut in such a way that it’s designed not to bore the audience, but the downside is that there is little sense of time over their three-year journey.

Another drawback of Fazili telling his own story is that he sometimes concentrates on the facts, rather than on the mental or psychological cost. It’s almost as if it’s too hard to look at the worst aspects of the trip, which is most evident when he agonises over whether he should turn the camera on when one of his daughters goes missing.

The most powerful scene in Midnight Traveler is a moment in which his daughter dances and sings along to the Michael Jackson hit “They Don’t Care About Us” in a refugee camp. It shows the power of music and recognition to generate a reaction among the audience, and more worryingly, it demonstrates our desensitisation to images of refugees crossing borders. The film also excels in the way it shows that middle-class liberals who make movies and run a café can lose everything in an instant. They want their children to be artists and encourage them to see the beauty of the world. Even when forced to sleep in a half-built building in Serbia in winter, the director juxtaposes the sheer danger of the snow with the beauty of snowflakes falling. It’s magical as much as it’s horrific, but this creates a kind of disengagement with the plight itself. The film becomes about the director’s own confusion – he still sees himself as an artist, while almost everyone he meets sees him as a refugee, and that comes through, as ultimately, the Fazili family need us to leave our own prejudices and disengagement behind.

The winners of the 16th edition of Armenia's biggest festival include Beanpole, Horizon and Midnight Traveler, while Carlos Reygadas was honoured with the Parajanov's Thaler Award

Honeyland and Advocate triumph at Docaviv

The Macedonian hit has bagged the main award; winners in the Israeli competition also include Once Upon a Boy, Mussolini's Sister, Leftover Women and There Are No Lions in Tel Aviv 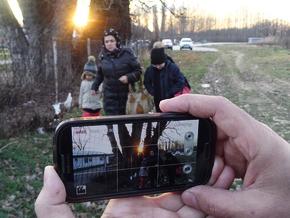