Review: On the Starting Line

13/02/2019 - BERLIN 2019: In his first film, about Cuban athlete Jenniffer, Aldemar Matias wanders around, recording her family and her country, but creating a movie that fails to leave a lasting impression

Jenniffer Rodriguez Lamoth in On the Starting Line

Cigars, mojitos, divine beaches, the crimes perpetrated by the Fidel Castro regime... Cuba is usually presented in black or white. The middle ground, or grey area, which one might call “everyday life”, is rarely seen on film. But Brazilian debutant Aldemar Matias begins On the Starting Line [+see also:
trailer
interview: Aldemar Matias
film profile] (screening in Panorama at the 69th Berlinale) in a classroom, and he has a good reason for doing so.

The audience is introduced to Jenniffer and her teammates, who are being reminded that athletes are very important figures in Cuban society. They are compared to the ancient gods who resided on Mount Olympus, and everyone who runs, jumps or throws things while wearing the national colours is a patriot. But what happens when someone’s body refuses to cooperate because of a sports injury? Is the athlete a patriot or not? Jenniffer could use a break, but her slave-driver of a mother pushes her to continue her workout – it is her patriotic duty, after all. But she also supports her son and his plans to leave the country for a very long time.

Matias presents a standard, modern Cuban family together with all its contradictions and complexity. He comes into very intimate contact with Jenniffer and her relatives, thus creating an effective character study. The camera is close to the subjects of the film, but never gives the impression of being an intruder or an uninvited presence disturbing the natural course of events, and this type of relationship with the protagonists can be viewed as a sign of some talent in documentary filmmaking (and is not really overshadowed by the fact that Matias worked with the protagonist previously).

Unfortunately, the film lacks a deeper layer and doesn’t really go beyond a basic examination of the subject matter. Employing an agreeable tempo, On the Starting Line is a nice, short (63-minute) watch, but fails to leave a lasting impression. Nevertheless, this should not serve to discourage the filmmaker – who, after finishing one race, should obviously take some R&R and prepare for the next one.

On the Starting Line was co-produced by France, Cuba and Brazil. David Hurst from Dublin Films produced the movie, and FiGa Films has the worldwide rights.

more about: On the Starting Line

Interview: Aldemar Matias • Director of On The Starting Line

BERLIN 2019: Brazilian filmmaker Aldemar Matias talks about his first film On The Starting Line, about a Cuban athlete, screened in the Panorama section

Review: On the Starting Line

BERLIN 2019: In his first film, about Cuban athlete Jenniffer, Aldemar Matias wanders around, recording her family and her country, but creating a movie that fails to leave a lasting impression 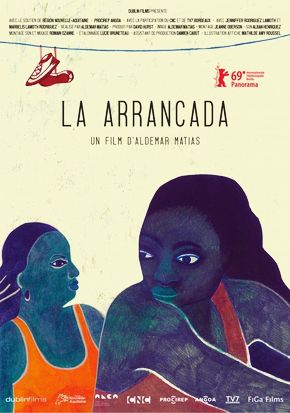