Sophie Rois and Philipp Hauß in Music and Apocalypse

“Idealism and administration are not contradictory,” states Professor Abstract-Wege, from the Institute of Cybernetics at Berlin University. His name (which translates as “abstract ways”), it will turn out, is applicable to his entire professional field and could even be used as a subtitle for this film. Just as abstract is the title of Music and Apocalypse [+see also:
trailer
film profile], Max Linz's feature premiered at the 69th Berlinale, in the Forum section. Linz is from a young generation of German independent filmmakers (alongside, for example, Julian Radlmaier and his Self Criticism of a Bourgeois Dog [+see also:
trailer
film profile]) who opt for intellectual storytelling focused on dialogue, using minimal resources, but still managing to create an outstanding visual language. Their compelling results have unfortunately attracted very little attention so far, probably because they are contrary to traditional viewing habits, and require the viewer to engage in his or her own intellectual debate.

The library at the institute has been occupied by students. They fear that the university will be remodelled, in accordance with the rules of economics, to create a more profitable and practical output of the research undertaken there. At the same time, they criticise the fact that what they are being taught doesn't correspond with, and therefore doesn't prepare them for, the real outside world. This paradox is at the centre of Music and Apocalypse, in which the main character is Phoebe Phaidon (Sarah Ralfs), a young climate scientist leading a seminar on “Simulation Studies” on behalf of the head of the institute, Brenda Berger (Sophie Rois).

The film calls to account an entire professional field. The professor mocks himself, especially over a language full of foreign words and Anglicisms that is used by scholars in their communication. It creates a cosmos that only authorised people have access to, and through which they evade their social responsibilities. This doesn't necessarily mean that they understand each other, though. The protagonists of Music and Apocalypse all seem to talk at cross-purposes, interrupting one another and always falling back on the special role they presume to play in society. It's this lack of consensus that is the target of Linz's satire. He raises the question of who, ultimately, benefits from such research, and hypothesises that it sustains a closed world that only serves itself and is maintained purely for its own sake.

Above all, the verbal exchange of blows is great fun to watch. The dialogues are intelligent, misleading the viewer from the start, since he or she is bombarded with technical terms and concepts, which soon prove to lack any substance whatsoever. The acting is static, reminiscent of that found in a stage play. With its reduced, minimalistic form, the movie develops a dry sense of humour that is convincingly conveyed by the excellent cast. Lead actress Sarah Ralfs manages to serve as an empty vessel and the perfect blank canvas. Her character's passiveness is irritating, but it fits in perfectly with the stagnation and constant repetition that determine her and her colleagues’ everyday life.

In Music and Apocalypse, an equally impressive visual level is added to the strong verbal one. The setting, décor and props, such as the rubber replica of the Earth and the extravagant designer furniture, are colourful, playful and highly ironic. The same applies to its soundtrack, performed by the actors themselves. The film has a sort of retro style that can be observed in the clothes of the protagonists and in the design of the simulation programmes. This clashes with the very definition of research, which aims to constantly attain new achievements, and once again underlines the obsolete thought patterns inherent in society. The film is highly subversive – and therefore very much needed.

Music and Apocalypse was produced by Maximilian Haslberger, of Germany’s Amerikafilm.

more about: Music and Apocalypse 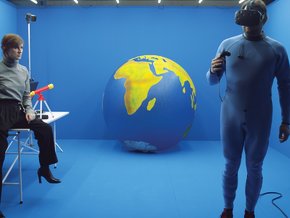 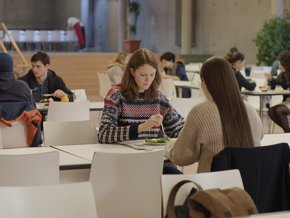 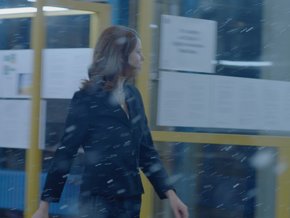