Review: Progress in the Valley of the People Who Don’t Know

15/02/2019 - BERLIN 2019: With his documentary, Florian Kunert pours salt in the wound of an entire German region recently in the glare of the media owing to a series of xenophobic disputes

With Progress in the Valley of the People Who Don’t Know [+see also:
trailer
film profile], presented in the Forum section of the 69th Berlinale, young German filmmaker Florian Kunert, born in 1989, presents a documentary that has an understated tone but a lasting effect on the audience. With astounding sensitivity, he depicts people from different cultures trying to get used to each other, and a part of his home country that is caught between its past and its present. In the German Democratic Republic (GDR), the term “Valley of the Clueless” was used to refer to the region located too far away from the East-West border to receive any Western broadcasting, and was therefore cut off from any relevant news.

It would seem paradoxical that, recently, it is precisely this region that has regularly been the focus of the national media’s attention. Here, the right-wing and neo-nationalist movements have found apparently fertile ground for nurturing new recruits. Attacks and demonstrations against foreigners have been particularly virulent over the last few years, ever since the wave of incoming Syrian migrants intensified. Kunert’s experiment aims to confront GDR veterans with their new fellow citizens. In a ruinous old state factory called “Fortschritt” (“Progress”), they meet for a German lesson. While the elderly locals stroll through the halls full of nostalgia, the Syrians explain how astonished they were to have set up camp here, as it reminds them too much of the war-torn ruins at home. One of the grumpy local former factory workers remarks that the guests are grateful – or certainly should be – for this safe haven.

In the course of the events shown on screen, the audience observes how the two parties constantly talk at cross-purposes. This adds a subtly ironic dimension to the film, especially when the refugees recount the details of their professional training, and a local makes naïve comments on it, taken aback. She also wants to know why they actually fled Syria, but her husband, who speaks Arabic, suggests they skip that particular question. The movie descends into total absurdity when some locals dress three of the refugees in GDR Young Pioneer uniforms and play with them, making them march in formation and awarding them medals. It seems that in these foreigners, they have finally found someone who will listen to their complaints about the end of the “good old days”, when no one else is willing to do so. The Syrians resemble puppets without any proper identity to speak of. Here, the parallel with the public controversies surrounding the refugee crisis becomes apparent. We mostly talk about numbers or groups, but rarely do we focus on individuals, except in the context of criminal law.

The strength of Kunert's documentary lies in its concentrated form, with sudden cuts avoiding any redundant footage. The auteur mostly takes a back seat, putting his subjects centre stage. He mixes his original material with found footage from the 1950s and 1960s, when East Germany and Syria struck up a partnership based on their communist values – a moment of jubilation that seems unthinkable today and highlights just how changeable human nature is. Therefore, there can be no talk of any real “progress”, which is why the title of the film can only be seen as ironic.

Aside from one problematic staged episode in which a German couple is asked to hold a framed picture of the GDR's former General Secretary, Erich Honecker, and talk about (and to) it, the movie comes across as very authentic. It is not a bill of indictment, but rather an attempt to get a little closer to different mentalities. Its calm and collected manner, which steers clear of being openly controversial, is very appealing and means that the feature should have a lasting effect on the viewer.

Progress in the Valley of the People Who Don't Know was produced by The Story Bay and the Kunsthochschule für Medien in Cologne.

more about: Progress in the Valley of the People Who Don't Know

Review: Progress in the Valley of the People Who Don’t Know

BERLIN 2019: With his documentary, Florian Kunert pours salt in the wound of an entire German region recently in the glare of the media owing to a series of xenophobic disputes 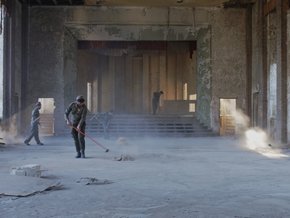 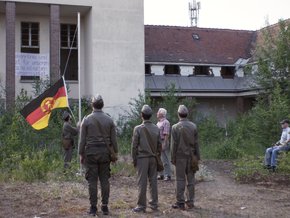 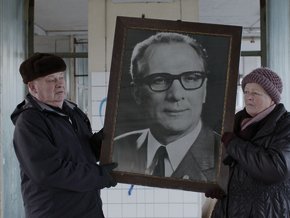