Review: It Could Have Been Worse - Mario Adorf

16/02/2019 - BERLIN 2019: German documentary filmmaker Dominik Wessely offers up the interesting and subjective journey of actor Mario Adorf as he travels through over half a century of international cinema

Although this journey through the life and work of Mario Adorf – which we take in the company of said actor - comes in a rather conventional package (where film extracts punctuate a largely chronological – though not rigid – montage of interviews with the subject, who we see walking or seated in significant places, either alone or with those who’ve had an impact on his career, with the overall effect further enhanced by archive footage and photos), we do have a good time with the German-Swiss actor in Dominik Wessely’s documentary, It Could Have Been Worse - Mario Adorf [+see also:
trailer
film profile], presented at Berlin within the Berlinale Special section of the festival. We go on an interesting, subjective journey in his presence, starting in the 1950s and travelling through over half a century of great German, Italian and international cinema, without forgetting some of the side roads he took, where we find bad guys and ugly guys, and his forays into the giallo genre, where we find Fassbinder, or Dario Argento...

The protagonist’s outlook is interesting for its singularity. His life hasn’t just taken him across many countries, but he has also journeyed through History in a way which has influenced his work (for example, the fact that he was part of the Hitler Youth as a child, for better or for worse, helped him to flesh out his role in the Oscar- and Palme D’Or-winning masterpiece, The Tin Drum by Volker Schlöndorff). But what is also original is the way in which the actor forges himself a (considerable) career, and a strict ethical code, despite being pigeon-holed from the outset for his sturdy physique. He may have shot films with the two German filmmakers mentioned above, as well as the likes of Comencini, Sam Peckinpah, Dino Risi, Skolimowski, Lattuada, Gianni Amelio, Chabrol, and Bille August - though not necessarily in lead roles - but his unique physical presence also afforded him cult actor status amongst enthusiasts of series B, Italian films from the 70s and 80s, for example.

We come across figures such as Senta Berger and Margarethe von Trotta in Wessely’s documentary, characters who are by Adorf’s side in an interview where they reminisce over anecdotes and big moments in cinema. And then there’s Hanna Schygulla, Brigitte Bardot, Charlton Heston, and Karl Marx in Casablanca (!). But the real interest here is the combination of a well-illustrated repertory of films (the director spends the time that is required on the few chosen works, allowing us to appreciate and re-appreciate what they bring to the discourse of the film) with revelations in areas that we’re less familiar with – notably Mario Adorf’s career.

At one point, the actor reveals that it was while observing rehearsals from backstage in a theatre that he had the ingenious idea to begin his career on stage, and he was the only one among his dramatic arts friends to think of it. In such a light, it’s only natural that the walk we take in his company is somewhat different and refreshing.

It Could Have Been Worse - Mario Adorf was produced by German group Coin Film.

more about: It Could Have Been Worse - Mario Adorf

Review: It Could Have Been Worse - Mario Adorf

BERLIN 2019: German documentary filmmaker Dominik Wessely offers up the interesting and subjective journey of actor Mario Adorf as he travels through over half a century of international cinema 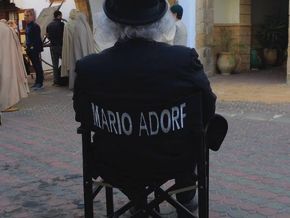