18/02/2019 - BERLIN 2019: Sudanese director Suhaib Gasmelbari tells the story of the heroic adventure embarked on by four seasoned filmmakers who want to revive cinema in a country under strict Islamic rule

Bring films back to Sudan, that’s what Ibrahim, Suleiman, Manar and Altayeb want to do –friends for nearly half a century. Bringing films back to a country that no longer has working cinemas, and where children aren't even aware of the expression "to go to the cinema," will involve physically rebuilding the cinemas themselves and reinventing what most of the free world takes for granted: an art and industry that was born over a century ago, before evolving and undergoing various crises and exciting moments. Talking About Trees [+see also:
trailer
film profile] by Sudanese director Suhaib Gasmelbari – his first feature film, selected in the Panorama section at the Berlinale and winner of the festival's Best Documentary Award – tells the story of this exciting, heroic and somewhat humorous adventure.

Ibrahim, Suleiman, Manar and Altayeb are no ordinary folk. They left their homeland in the '60s and '70s to study cinema abroad, before founding the Sudanese Film Group in 1989. After years of distance and exile, they've reunited, hoping to finally achieve an old dream of theirs. Ibrahim Shadad, the most radical of the four,studied filmmaking in the 1960s at the Film University Babelsberg Konrad Wolf in East Germany. Many of his projects have since been banned in Sudan. He spent years in exile in Egypt and Canada before returning. Manar Al Hilo, graduate of the Cairo Higher Institute of Cinema in 1977, has always been dedicated to producing films by his friends in Sudan. Suleiman Mohamed Ibrahim, the driving force behind the group, studied documentary at the Gerasimov Institute of Cinematography in Moscow. His short film won an award at Moscow International Film Festival in 1979. He refused to go into exile after the 1989 military coup. Finally, Al-Tayeb Mahdi, a man of few words, graduated from the Cairo Higher Institute of Cinema in 1977 and has since directed artistic and politically courageous short films.

In the prologue of Talking About Trees, the four men talk by candlelight, after the national electricity company disconnects electricity in the area, almost like a metaphorical rejection of cinema itself, which is manifested as light. Images bounce around a radio studio. Ibrahim states that cinema is a hero "that can die a natural death or be killed by a traitor." Controversy still surrounds the Islamic dictatorial regime, while love for the film industry stands strong. Travelling about in a rusty old van, the foursome arrives at a village square, before attaching a cloth to a wall. Men, women and children soon arrive and sit on chairs in this improvised cinema. The projector starts up, it’s Modern Times by Charlie Chaplin, the children laugh. Their dream, however, is to screen a film in a large and dilapidated 5000-seat outdoor theatre-cinema in Khartoum. "No sponsors or advertising, no speeches or government ministers." The theatre owner (which is called Revolution Cinema) authorises them to restore the building. However, they still need to ask the municipality and National Intelligence and Security Department for permission. They write to the Ministry of Culture on the grounds of a "mutual interest in revitalising cinema as a means of attracting young people." Meanwhile, they need to find a 10,000-lumen projector and a screen, and they also need to figure out what people actually want to watch, so they pass around a survey. The people vote for Django Unchained byQuentin Tarantino. National Security leaves new obstacles in their path, and authorisation is soon revoked due to a "policy of morality" and "political security." Meanwhile, President Omar Al-Bashir is voted into government again, taking 94.5% of the vote. Political and religious power wins once more.

more about: Talking About Trees

While the top prize went to Argentina, the Spanish competition saw the triumph of the short Carne and the audience plumped for Manoliño Nguema, a Spanish-Guinean co-production

BERLIN 2019: Sudanese director Suhaib Gasmelbari tells the story of the heroic adventure embarked on by four seasoned filmmakers who want to revive cinema in a country under strict Islamic rule

Synonyms is synonymous with the Golden Bear

BERLIN 2019: Israel’s Nadav Lapid has scooped the top Bear with his Parisian tale of transformation, during a ceremony where Europe and Germany shone

BERLIN 2019: Stitches received the Europa Cinemas Label, while 37 Seconds and Talking About Trees got the Audience Awards in the Panorama section 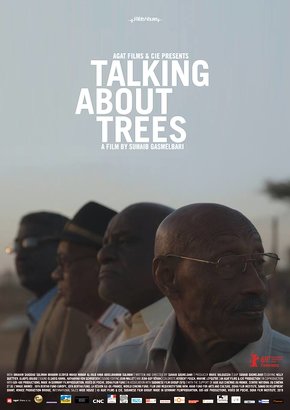